The Sixth Amendment of the U.S. Constitution grants a criminal defendant the right “to be confronted with the witnesses against him.”  This fundamental right includes the right to physically face those who testify against him or her to ensure the witness gives his statement in front of a jury.  The jury may then evaluate the witness’ demeanor, the tone of his voice, the pauses in his testimony, etc., to determine that witness’ credibility and better decide if defendant committed a crime.  One of the motivations behind such a right is to prevent “phantom” witnesses who are fabricated by police to convict someone.

Main Point:  Defendant’s Sixth Amendment right to confront the witnesses offered against him is not violated when an informant testifies in a disguise (wearing a fake mustache and a wig).

The demeanor includes the witness’ emotions and facial expressions, such as smiling or crying.  This can help the jury determine if the testimony is trustworthy.

Jorge de Jesus-Casteneda was convicted of possession with intent to distribute methamphetamine (21 U.S.C. § 841(a)(1) and (b)(1)(B)(viii)).  Evidence at trial included that Casteneda drove a car for a fee to an undercover warehouse and delivered ten pounds of meth to undercover cops at the warehouse. 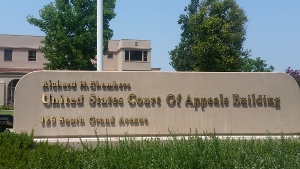 U.S. Ninth Circuit Court of Appeals Pasadena
The government’s most important witness at trial was a confidential informant.  Because of the danger he faced for testifying against Casteneda, the government requested that the judge allow the informant to wear a fake mustache, sunglasses and a wig when testifying at trial.  The judge permitted this disguise, but without sunglasses, relying on the government’s representation that the informant was involved with ongoing investigations of the “dangerous” Sinaloa Cartel.
Casteneda obviously wanted the informant to be ordered to testify without any disguise because the informant might refuse to appear in court for fear his safety and that of his family.  Therefore, the argument that the Sixth Amendment was violated was most likely viewed with some skepticism by the trial court.  Without this key informant, it appeared that Casteneda may not be convicted.

The United States Court of Appeals for the Ninth Circuit began its analysis (2013 DJDAR 1309) by noting that the standard it needed to apply in evaluating the trial judge’s ruling was whether the judge abused his discretion in so ruling. United States v. Shyrock (9th Cir. 2003) 342 F. 3d 948, 974 (a court’s decision to impose security measures is reviewed for an abuse of discretion).

The Court of Appeals then noted that no Ninth Circuit or U.S. Supreme Court case has addressed if a defendant’s Sixth Amendment rights are violated if a witness is allowed to testify in disguise.

Thus, the court of appeal looked to other states for rulings on disguising a witness and the Sixth Amendment.  In Romero v. State, a 2005 case in Texas, a witness way allowed to testify wearing dark sunglasses, a baseball cap pulled down over his forehead and a jacket with an upturned collar.  The witness allegedly was fearful of retaliation from the defendant.  The Texas judge allowed this to further an important state interest, namely, witness safety.

In the Casteneda case, the appeals court found that the trial judge’s order at issue similarly furthered an important state interest; also, witness safety. Moreover, Casteneda’s ability to cross examine the informant was better than in the Romero case because Casteneda’s counsel could see the witness eyes.  The jury also could see if the informant made eye contact as he testified.  Therefore, even if there was error in allowing such a disguise, the Appeals Court found it harmless.

On this basis, the court of appeals affirmed the trial court’s ruling.  Casteneda’s appeal was denied.

It will be interesting to see if Casteneda appeals this decision further, up to the U.S. Supreme Court, as the Ninth Circuit suggested may be viable because the highest court in our county has not ruled yet on any case addressing this issue.
The citation for the Ninth Circuit, U. S. Court of Appeals, ruling discussed above is U.S. v. de Jesus-Casteneda (9th Cir., 2013) 705 F.3d 1117.
For more information about the Sixth Amendment, click on the following articles:
Contact Greg Hill & Associates