Brief Synopsis: A 911 call may constitute reasonable suspicion for police to detain an individual if the caller describes the totality of the circumstances such that there is sufficient reliability to what the caller describes and information of a serious enough crime to justify a law enforcement stop or detention.

Imagine you are walking down the street and you hear sirens from police cars.  You are walking over to your neighbor’s house to borrow some tools because you are assembling some furniture.  It is just past dark.  The police cars seem to be getting closer and closer.  You then see the police and they stop, surrounding you.  They order you to lay on the ground.  They draw their weapons on you and begin yelling loudly not to move.  You comply, as you fear what crime they mistakenly think you are involved with and that they may shoot.
They handcuff you and throw you in a police car.  You ask them what is going on and they respond, “Don’t play innocent.  You know what is going on!”
You arrive at the police station and officers throw you into a holding cell and lock the doors.
They later open the doors and apologize, explaining they received a 911 call and acted on it.  You are driven home with more apologies.
What is the legal standard for a 911 call to constitute sufficient reasonable suspicion for police to detain an individual?  The following case summary from a real case in Concord answers such questions.
At about 11:30 p.m. on February 17, 2018, a bar employee called police to report that there was a man in the bar, the Nica Bar, with a gun and that three other bar patrons had told him this.  The employee provided his name, employment capacity at the bar and indicated he was calling from inside the bar.  The employee further stated that the man with gun then walked out of the bar toward another neighboring bar and a restaurant, The Pizza Guys. 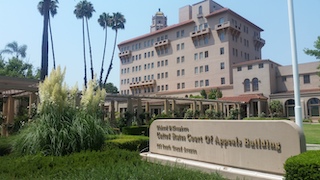 U.S. Ninth Circuit Court of Appeals Pasadena
The man with the gun was described as Latin, wearing a blue sweater with a Golden State Warriors logo, skinny, in his early 20’s.  The dispatcher asked if the suspect had been fighting and the calling said he was not fighting.
Police were dispatched to the bar area while dispatch continued to talk to the caller.  Police then arrived and they saw the man running across the parking lot and jumping into a black four door car the caller described as a “Crown Vic.”  The man then left the area.
Police located the car and the man and did a “high risk car stop.”  Police then searched the car and found a loaded semi-automatic handgun under the center console to the right of the driver’s seat.  Police then arrested Shane Mauritz Vandergroen.
Vandergroen was later charged in federal district court with being a felon in possession of a firearm in violation of 18 U.S.C. § 922(g))(1).
Vandergroen made a motion to exclude evidence of the pistol because the 911 call should never have led to his stop because it did not generate reasonable suspicion.  Vandergroen pointed out that he was not Latin.
The district court hearing the motion disagreed and denied the motion.  Vandergroen was later adjudged guilty during a stipulated-facts bench trial.
Vandergroen then appealed the denial of his motion to suppress to the United States Court of Appeals for the Ninth Circuit.  The Ninth Circuit began its analysis by pointing out that its review of a lower court’s denial of a motion to suppress is de novo, meaning it reviews any underlying finding of fact for clear error.  United States v. Torres (9th Cir., 2016) 828 F.3d 1113, 1118.
It then laid out the controlling law that governed the motion’s issues, specifying that under the Fourth Amendment, an officer may make a brief investigative stop only where she has “a particularized and objective basis for suspecting the particular person stopped of criminal activity,” commonly referred to as reasonable suspicion.  Navarette v. California (2014) 572 U.S. 393, 396-397.
While a tip from a 911 call may generate reasonable suspicion, it can only do so when, under the “totality of the circumstances,” it possesses two features.  United States v. Rowland (9th Cir., 2006) 464 F.3d 899, 907.  First, the tip must exhibit sufficient indicia of reliability, and, second, it must provide information on potential illegal activity serious enough to justify a stop.  United States v. Edwards (9th Cir., 2014) 761 F.3d 977, 983.
Here, the reliability was sufficient because the bar employee provided his name and employment capacity and described the basis for his knowledge.
As to whether the call sufficiently described criminal activity being “afoot,” the Ninth Circuit found that the suspect was carrying a concealed firearm, which is presumptively illegal in California if one does not have a concealed carry permit, and the nature of the conduct, involving a gun is serious enough to justify his immediate detention.
Therefore, the detention of Vandergroen was legal and the appellate court affirmed the lower court’s ruling.
The citation for the U.S. Ninth Circuit Court of Appeals ruling discussed above is United States v. Shane Mauritz Vandergroen (9th Cir., 2020) 18-cr-01333-PJH-1.
For more information about 911 calls being legally sufficient for a traffic stop or detention, please click on the following articles:
Contact us.