Home
Other Information
Criminal Defense Articles
May Police Point Their Guns at You Based on Anonymous Tip?

May Police Point Their Guns at You Based on Anonymous Tip?

Our office receives calls quite often about what is perceived as police violating someone’s civil rights.  The caller may be facing serious charges with significant prison time, but the bigger interest is in a windfall of money based on a civil rights violation.

Our patience is often tested when we hear such earnest callers, but what sometimes happens is that woven within the facts, the caller describes an affirmative defense to the criminal charge or a bigger issue that means the traffic stop, for example, was illegal.

The Gist of this Article: Depending upon what is said in an anonymous tip, police may be able to point their guns at someone, especially if the individual resembles the suspect described in the anonymous tip.

The following case came close to being dismissed, but defendant may have first perceived a civil rights case as more important.

On May 3, 2012, Inglewood police officers were dispatched to Hyde Park Boulevard at West Boulevard based on an anonymous call that “a young black male” was shooting at passing cars, including the caller’s car.  The caller described the shooter at between 5’ 7” and 5’ 9” tall and being nineteen or twenty years old.  The caller described the shooter as wearing khaki pants and a black shirt.  He said the shooter then stopped shooting and ran into Penny Pincher Liquor.  It was 7:42 p.m. 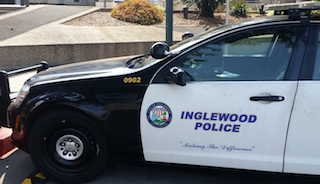 Inglewood PD Car
Two police officers arrived at the scene about three minutes later.  Officers saw Reginald Aaron Edwards, an African American male, age 26 and 5’ 11” tall wearing gray pants and a black shirt.  There was only one other person nearby, who was Hispanic and wearing a green jacket and blue jeans.
Two other police officers then arrived.  The first two officers drew their guns and ordered Edwards to stop and kneel to the grown.  The officers then walked up to Edwards and put handcuffs on him.  As he was patting down, he felt a hard object near his right knee, inside the pants.  The officer then shook the pants to jiggle out the object, which turned out to be a .22 caliber revolver.

The officers then transported Edwards to the police station.  Police determined he was not the shooter, but they charged him with being a felon in possession of a firearm, in violation of 18 U.S.C. § 922(g)(1) in federal court.

Edwards moved to suppress all evidence gathered as a result of the initial stop and frisk.  The trial court judge denied the motion, finding that under United States v. Terry-Crespo (9th Cir., 2004) 356 F.3d 1170, officers did not need probable cause to detain Edwards because they had a reasonable suspicion for the stop
.
Edwards then entered a conditional plea and was sentenced to four years in federal prison.  He then appealed the ruling on the motion to suppress to the United States Court of Appeals for the Ninth Circuit.

The Ninth Circuit framed the issue as whether the gun found on Edwards was obtained from a seizure that exceeds the bounds of a mere investigatory stop and thus became a de facto arrest (and therefore illegal).  If there was an arrest, probable cause is needed, not just reasonable suspicion.

The totality of the circumstances determines whether the detention was merely an investigatory stop (permitted under Terry v. Ohio (1968) 392 U.S. 1) or an arrest.  The court first looked at the intrusiveness of the police action and how much the suspect’s liberty was restricted.  Second, the court must look at the justification for the police use of such tactics, i.e. whether the officer feared for his safety to warrant the intrusiveness.

Here, there was no doubt that the stop was intrusive.  Four police officers had their weapons drawn and pointed at Edwards.  He was handcuffed before being patted down.  When police draw their guns, it greatly increases the seriousness of the stop.  Handcuffing someone also aggravates the intrusiveness of an otherwise routine investigatory detention.

However, the justification for the intrusiveness was sufficient for the stop to remain classified as a mere detention.  The Ninth Circuit found that the officer’s conduct was reasonable for the circumstances and because Edwards’ appearance closely matched the description given by the anonymous caller.

As such, the appellate court affirmed the trial court’s ruling that the stop was not an arrest, but a mere detention and thus, the ruling on the  motion to suppress was correct.  We at Greg Hill & Associates find this ruling was a closer call than the courts were willing to admit.  What is not stated is that when officers came to the scene, there was nothing about Edwards’ behavior that cause police to suspect he was the shooter.  This should have been a big part of the evaluation by the police.  Instead, it was not described at all.
The citation for the United States Ninth Circuit Court of Appeals ruling discussed above is  United States v. Reginald Aaron Edwards (9th Cir., 2014) 761 F.3d 977.
For more information about detention and arrest issues, click on the following articles:
Contact us.
Serving Torrance, Long Beach, Compton, Airport Courthouses and Other Courthouses.