When a Gang Sentence Is Not a Gang Enhancement

Penal Code § 186.22 provides that a judge may increase a sentence by two to twenty-five years if someone is convicted of a felony that was committed for the benefit of a criminal street gang, with the specific intent to promote, further or assist any criminal conduct by other gang members.

The Gist of this Article: A good defense attorney will look closely at the Penal Code § 186.22 criminal street gang sentencing enhancement to try to have it dismissed, either by showing the gang is not big enough or that other gang members engaged in the minimum predicate criminal acts (“pattern of criminal activity”) required to qualify as a criminal street gang.

To qualify as a criminal street gang, a gang must have three or more members who
individually or collectively engage in an ongoing pattern of criminal gang activity.

A “patter of criminal activity” is defined as the commission of, or attempted commission of, various enumerated criminal acts, as long as two such acts took place within three years of each other.  The acts do not have to be proven by convictions, but certainly can be. 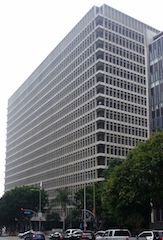 Clara Shortridge Foltz Criminal Courts Building CCB Downtown LA
These provisions are set forth for the reader to appreciate that when an individual is accused of being a gang member and committing an act to further the gang, a closer look is merited.  This is especially true when the so-called gang is very small and perhaps dissolved, as we find is often the case.
The case of People v. Richard Garcia exemplified why knowing such standards and applying them to the facts can make a huge difference.

The trial court denied probation and sentenced Garcia to state prison for nine years, consisting of three years on the count for shooting a firearm in a grossly negligent manner, plus five years for the use of a firearm in further once of a gang plus one year for one of his prior convictions.  Under Penal Code § 654, judge Antonio Barreto, Jr., stayed the sentence imposed on the other prior conviction (one year) and the firearm use enhancement (ten years).

Garcia appealed the gang enhancement imposed on him, arguing that the prosecution had not proven that the predicate offenses of other “Lil Watts” gang members were within three years of each other as required by Penal Code § 186.22(e).

The Second Appellate Division, in People v. Richard Garcia (2014 DJDAR 2793), agreed with Garcia that while there was evidence that Garcia fired a weapon in the direction of rival gang members, the court agreed that the prosecution did not show that two or more members of “Lil Watts,” which Garcia was allegedly a member of, had been convicted of any of the enumerated felonies within three years.  Therefore, the prosecutor had failed to prove a “pattern of criminal activity” as required by Penal Code 186.22(e) to support the gang enhancement.

The appellate court noted that during trial, Detective Keith Chaffin of the Hawthorne Police Department testified that Nicolas Rendon and Christopher Delfosse were also known Lil’ Watts gang members.  The trial court then admitted into evidence records showing that on October 26, 2009, Rendon was convicted of possession of a firearm (Penal Code § 12021(a)(1)), after an arrest on July 30, 2009.  The court also admitted records into evidence that Delfosse was convicted of assault with a firearm (Penal Code § 245(a) (1) for an act that took place on April 29, 2004.

As more than three years passed between April 29, 2004 and July 30, 2009, there was not a pattern of criminal activity to qualify Lil’ Watts as a criminal street gang.  Moreover, in Garcia’s case, Garcia was acquitted of assault with a semi-automatic firearm (Penal Code § 245(b)), which were counts 1, 2 and 3.  While Garcia was convicted of other counts, only counts 1 through 3 were predicate offenses required under 186.22.

The appellate court pointedly rejected the prosecutor’s argument that Garcia’s shooting a firearm in a grossly negligent qualified as one of the predicate offenses listed under Penal Code § 186.22(e)(23), even though Garcia was not a minor as 186.22(e)(23) specifies.  The court would not agree to such a new interpretation of the Penal Code.

As such, the court reversed the gang enhancement and the judgment was ordered modified to reflect this change.  This knocked five years off Garcia’s sentence.
The citation for the Second Appellate District Court ruling discussed above is People v. Richard Garcia (2d App. Dist., 2014) 224 Cal.App.4th 519, 169 Cal.Rptr.3d 85.
For more information regarding criminal street gang cases, please click on any of the following links:
Contact Greg Hill & Associates