For almost thirty years, California law has permitted juries to find whether a defendant committed a crime with the specific intent to “promote, further, or assist in any criminal conduct by gang members.”

The Reader’s Digest Version:  Gang enhancement is reversed on appeal when the Second Appellate District finds the gang expert in Norwalk Superior Court testified in a way that did required the jury to speculate about defendant’s purpose to further or promote a gang.

Penal Code § 186.22 provides for such a finding and then, for the judge to add to, or enhance, defendant’s sentence.  There are two requirements under § 186.22, both of which must be satisfied by the evidence. People v. Albillar (2010) S1 Cal. 4th 47, 59.  First the jury must find that the underlying felony was “gang related.”  This means that the defendant committed the charged offense “for the benefit of, at the direction of, or in association with any criminal street gang.” Penal Code § 186.22(b)(i).

The second prong “requires that a defendant commit the gang-related felony with the specific intent to promote, further, or assist in any criminal conduct by gang members.” Id.  The California Supreme Court has noted that “the prosecution’s evidence must permit the jury to infer that defendant sought to benefit the gang, and the gang that the prosecution proves to exist, are one and the same.“ People v. Prunty (2015) 62 Cal 4th 59,66-67.  In other words, the defendant cannot commit a crime with the general intent to benefit gangs in general. 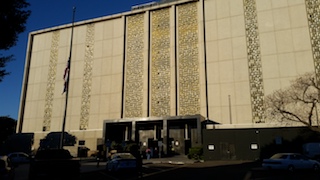 Norwalk Courthouse
T
o prove the elements of the criminal street gang enhancement, the prosecution may present expert testimony on criminal street gangs. People v. Hernandez (2004) 33 Cal. 4th 1040, 1047-1048.  “Expert opinion that particular criminal conduct benefited a gang “is not only permissible, but can be sufficient to support a gang enhancement. “ People v. Vang (2011) 52 Cal. 4th 1038, 1048.  While an expert may testify to an opinion assuming the truth of facts set forth in a hypothetical question, the “hypothetical question must be rooted in facts shown by the evidence.” People v. Gardeley (1996) 14 Cal. 4th 605, 622.
However, the expert’s opinion may “not be based on speculative, conjectural factors or assumptions of fact without evidentiary support.” People v. Richardson (2008) 43 Cal 4th 959,1008, Gardeley, supra, at 618 [“Like a house built on sand, the expert’s opinion is no better than the facts on which it is based.”]

In our experience with gang cares, this fundamental requirement about expert testimony is often overlooked and expert testimony often exceeds the scope of what is allowed.  The gang expert is afforded great latitude, because, after all, gang matters are often violent and serious crimes that the public in general has an interest in punishing.

The case of Robert Franklin out of the Norwalk courthouse in Los Angeles County exemplified the dangers of giving a gang expert too much latitude to testify.

Franklin opted for a bench trial and was convicted of all charges.  The judge sentenced him to 18 years and four months in state prison.

Franklin appealed on four main grounds to the Second Appellate District.  This article will only address his argument that there was insufficient evidence to support the gang enhancement.

On this argument, the Second Appellate District agreed with Franklin, finding there was insufficient evidence on both prongs of the gang enhancement requirements.

On the first prong, the appellate court found that the prosecution expert, Detective Lopez, only testified that Franklin falsely imprisoned his girlfriend, Crystal Delgado, with three friends who were members of other gangs, not Franklin’s gang, the Jim Town gang.  There also was no evidence that even one member of the Jim Town gang was aware of what Franklin was doing.

The court also found that the prosecutor failed to present sufficient evidence that Franklin had the specific intent to “promote, further, or assist any criminal conduct by gang members.”  The court noted that “intent is rarely susceptible of direct proof and usually must be inferred from the facts and circumstances surrounding the offense.“ People v. Rios (2013) 222 Cal.App. 4th 542, 564.

The California Supreme Court has thus held that the knowledge requirement may be satisfied with proof “that the defendant intended to and did commit the charged felony with known members of a gang,” from which” the jury may fairly infer that the defendant had the specific intent to promote, further, or assist criminal conduct by those gang members.” Albillar, supra, at 68.

Turning to the facts of the trial, the expert testified that Franklin’s use of the word “we” in his threats meant gang members.  However, this required the jury to speculate which gang (the Jim Town gang or another gang), which is “patently insufficient to support an inferenced of fact.” Rios, supra, p. 564.

Consequently, the findings by the trial court of gang allegations were ordered stricken and the case was sent back to Norwalk for resentencing without the gang allegations.

We like this opinion.  Too often, so-called gang experts offer testimony that is too general (calling for speculation) or simply makes legal conclusions as to the facts of the case.  It is time for judges to carefully limit such testimony and exclude testimony that is improper or call for a jury or judge to guess what it means.
The citation for the Second Appellate District Court ruling discussed above is People v. Robert Franklin (2d App. Dist., 2016) 248 Cal.App.4th 938, 203 Cal. Rptr. 3d 876.
For more information about sentencing enhancements for being in a gang, please click on the following articles:
Contact us.
Serving Torrance, Long Beach, Compton, Airport Courthouses and Other Courthouses.