The movie “Fast and Furious” made speed contests glamorous and even sexy.  However, as anyone given a ticket for violating Vehicle Code § 23109(a), “Engaging in a Speed Contest,” will attest, the allure of such conduct is vastly overstated.

Such an offense can be charged as a felony if someone suffers serious bodily injury because of the speeding.  Serious bodily injury includes serious disfigurement, a bone fracture, a loss of consciousness, a cut or wound requiring extensive suturing, a concussion, and, but not limited to, protracted loss of or impairment of function of any bodily member or organ.

In a Nutshell: A conviction for “Engaging in a Speed Contest” (Vehicle Code § 23109(a)) covers a wide variety of conduct, including racing another vehicle or even going fast on one’s own, if using timing to measure one’s speed and to compete with others.  The punishment can be as a misdemeanor or as a felony.

Section 23109(a) makes it a crime to willfully participate in a speed contest.  Such a contest can be against another motor vehicle or just against a clock or some type of timing device.

Willfully means on purpose.  This means the person cannot just be speeding due to carelessness.  The person must be part of a race against time or another motor vehicle.

To participate means just to engage in the speed contest, but not necessarily to win.  A motor vehicle can mean not only a car, but a motorcycle, or even a bus or tractor trailer or another commercial vehicle (i.e. even a bulldozer or forklift might count).  The contest must be on a public thoroughfare, i.e. a public street.  This means having such a speed contest on an abandoned airport runway would not count, for example, nor would it violate this provision of the law if the contest was inside a warehouse or on a private dirt racetrack. 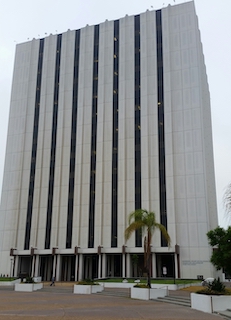 Compton Courthouse
While this is rarely an issue, the statute does state that it does not include a race if the race is over twenty miles in length and the vehicles do not exceed the speed limit.

The first time one is convicted of this crime, with no serious bodily injuries, the offense is a misdemeanor.  There are five parts to punishment.  First, the defendant faces at least 24 hours in county jail, to a maximum of 90 days in county jail.  Second, there is a minimum fine of $355, plus penalties and assessments.  The maximum fine is $1,000, plus penalties and assessments, which will total about $4,300.  Third, the defendant must perform 40 hours of community service.  Fourth, perhaps the most painful portion, the defendant faces a restricted or suspended driver’s license from 90 days to six months.  If the license is restricted, the defendant may only drive to and from work.

Lastly, the police may impound the vehicle that defendant was driving.  The vehicle will remain impounded for 30 days, which can be astronomically expensive.

On a second offense, meaning within five years of a prior conviction for violating 23109(a), defendant faces at least four days in county jail, up to a maximum of six months in county jail, plus a minimum fine of $500 plus penalties and assessments, to a maximum fine of $1,000, plus penalties and assessments.  There is also a mandatory six-month suspension of one’s driving privileges.

If serious bodily injury is caused, the offense can be charged as a misdemeanor or a felony.  If charged as a misdemeanor, the sentence must include at least 30 days in county jail and no more than six months in county jail.  The fine minimum is $500, plus penalties and assessments.  The maximum fine is $1,000, plus penalties and assessments.

If charged as a felony, defendant faces a minimum state prison sentence of sixteen months and a maximum sentence of three years, plus a fine of up to $10,000.

As one can see from the above punishment, it is desirable to resolve the case for something else that does not involve such tough punishment.  We try to negotiate a plea instead to reckless driving or an exhibition of speed most commonly.