What’s the Insufficient Evidence Standard in a 995 Motion?

Brief Synopsis:  Sufficient evidence is enough evidence that “a man of ordinary caution or prudence would consider and be led to believe and conscientiously entertain a strong suspicion of the guilt of the accused.”

The sufficient evidence standard relates to establishing probable cause that the allegations in the complaint can be proven at trial.  The probable cause standard, as often quoted from Rideout v. Superior Court (1967) 67 Cal.2d 471, 474, is evidence that “a man of ordinary caution or prudence would be led to believe and conscientiously entertain a strong suspicion of the guilt of the accused.”
Defense counsel like the “strong suspicion” level, meaning is it not just a small suspicion, or any suspicion, but much much more.  This even suggests a beyond a reasonable doubt to some, but this is not accurate.
In fact, to equate “strong suspicion” with “beyond a reasonable doubt” is a big mistake.  Rideout addresses this saying that “every legitimate inference that may be drawn from the evidence must be drawn in favor of the information,” suggesting a low threshold for finding probable cause.  Judges are fond of this low standard and seem to invoke it readily to hold over the case for a superior court arraignment rather than dismissing the case for insufficiency of the evidence. 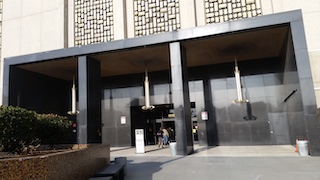 Norwalk Courthouse
What this means in a practical sense is that when applied is that when a witness with poor credibility testifies in favor of the prosecution, the judge is supposed to draw “every legitimate inference” from the bad witness in favor of holding over the case.  This often drives our clients nuts (and us, too), because we know a jury would find the person of such poor credibility that there would be a defense verdict.  We want to yell, “Your honor, no one would ever believe this witness, so you should not either.”
In other words, the truly only way to show there is insufficient evidence is to argue there is no evidence, direct or circumstantial, from which any reasonable inference supporting the charge being challenged might be drawn.  Williams v. Superior Court (1969) 71 Cal.2d 1144, 1148; People v. Casillas (2001) 92 Cal.App.4th 171, 178.  If two reasonable inferences can be drawn from the evidence and the judge hearing the preliminary hearing found in favor of holding over the case (not dismissing it), this cannot be reversed in a Penal Code § 995 motion later. People v. Superior Court (Bolden) (1989) 209 Cal.App.3d 1109.
Nonetheless, a 995 motion can succeed in arguing insufficiency of the evidence when the preliminary hearing transcript contains no evidence to support each element of the charged offense. Garabedian v. Superior Court (1963) 59 Cal.2d 124; Barber v. Superior Court (1991) 1 Cal.App.4th 793, 795.
Defense counsel can also argue, but it is often a losing argument, that the inferences drawn from the evidence were not reasonable, but were drawn from “guesswork, speculation or conjecture.”  Birt v. Superior Court (1973) 34 Cal.App.3d 934, 938.  This is a tough argument to make, as the reviewing judge must find that the other judge was guessing, speculating or engaging in conjecture, which judges most likely do not like to find in another judge.
Defense counsel can also argue that the evidence supporting the information was inadmissible evidence, but the evidence was received over objection, and that after excluding the inadmissible evidence, the remaining evidence was insufficient to support the charge.  Whitman v. Superior Court (1991) 54 Cal.3d 1063, 1068; People v. Jimenez (1995) 38 Cal.App.4th 795, 801.
In this “inadmissible evidence” argument, it is good to understand that hearsay evidence is admissible in a preliminary hearing if testified to by a qualified peace officer, including an honorably retired police officer (Penal Code § 872(b)).  This also can be extremely frustrating because in trial such evidence may be inadmissible, so logically it should not be considered at the preliminary hearing, especially if the practical result is to maintain a case that will only later end in a defense verdict.