Home
Other Information
Criminal Defense Articles
What Advantage Is There to Waiving a Preliminary Hearing?

What Advantage Is There to Waiving a Preliminary Hearing?

In our experience, most clients facing felony charges are eager to have an attorney cross-examine the arresting officer to impeach him or, as some clients expert, admit that something in the police report is wrong.  The understanding is that if the prosecution has one fact wrong, the judge must dismiss the case immediately.

It is good to have a healthy appreciation for the risk that testimony and new evidence will also be introduced at the preliminary hearing.  After all, if the evidence in support of the complaint, in a felony case, is less than all the evidence, it is likely that more evidence may be introduced at the preliminary hearing.  This would then allow the prosecutor to add more charges, increasing the maximum prison or jail time a defendant faces.  This can be a big risk.

Consequently, an astute criminal defense attorney should always consider waiving a preliminary hearing to “lock in” minimal charges or prevent increased, amended charges, when it is known there are possibly more charges possible. 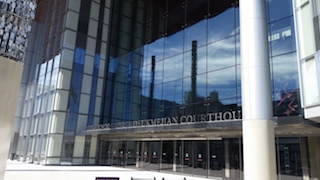 Long Beach Courthouse
The following summary of the above principals is exemplified in the case of Daniel Rogers in Shasta County.  Rogers was initially charged with inflicting corporal injury on a cohabitant child’s parent (Penal Code § 273.5(a)) and false imprisonment by violence (Penal §§ 232 and 237).  There were two enhancements, notably personal use of a deadly weapon in the commission of the false imprisonment (Penal Code § 12022(b)(1)) and a prior prison term allegation (Penal Code § 667.5(b)).
During the pendency of the case, Rogers waived a preliminary hearing.  Both defense counsel and defendant, as well as the prosecutor signed the waiver.  The same day, an information was filed with identical charges.

The jury convicted defendant on all counts except criminal threats.  The jury also found true the great bodily injury allegation (for a sentencing enhancement) in the amended information.  Defendant was sentenced to state prison for eleven years and eight months.  It is noteworthy that prior to the new prosecutor amending the complaint, the maximum exposure Rogers faced was five years and four months.

Rogers then appealed, contending that his attorney rendered ineffective of counsel in failing to object to the prosecutor’s amendment to the information.  Rogers argued that by waiving a preliminary hearing, the prosecution could not add the charges or the great bodily injury enhancement because they were not charged in the pleading to which he waived a preliminary hearing.

Rogers argued that the entire judgment must be reversed because the jury may have been swayed as to the original charges by evidence brought in support of the new charges and the great bodily injury allegation.  This is a good argument, we think.

The District Attorney agreed there was ineffective assistance of counsel, but urged complete reversal was not appropriate.

The Third Appellate District, in People v. Daniel James Rogers (2016 DJDAR 2954), agreed with Rogers that an information simply cannot be amended to add a conduct enhancement after a defendant has waived the right to a preliminary hearing.

Therefore, the appellate court struck the conviction for the amended charges and the great bodily injury enhancement.  However, the court disagreed that complete reversal was warranted and affirmed the verdict as to the original charges.  We think this ruling is incorrect.

In coming to this ruling, the appellate court cited to Penal Code § 1009, which prohibits amending an information to charge an offense not shown by evidence taken at the preliminary hearing.  The court then cited to many cases, the most recent being People v. Peyton (2009) 176 Cal. App. 4th 462, 654.  This is so even if the amendment would not prejudice defendant or if defendant had notice of the facts underlying the new charge. People v. Winters (1990) 221 Cal. App. 3d 997.

We end this article by sharing a personal anecdote.  Our office substituted in to represent a gentleman in Pomona, also on a domestic violence case like in Rogers.  Our client originally faced just one count, but went to his preliminary hearing on a case wherein his wife stated in the police report that there were many other instances of such violence.  She then testified at the preliminary hearing, describing such incidents.  Accordingly, the prosecutor filed an information alleging seven counts of domestic violence.

Our client then fired his attorney and hired Greg Hill & Associates instead.  Greg was able to resolve the case for two years of state prison, far less than the twelve years he faced on the new charges, but more than what he faced on one charge as originally alleged.  Had our client waived a preliminary hearing, he may well have never served one day in custody and may have resolved the case for a probationary sentence.
The citation for the Third Appellate District Court ruling discussed above is People v. Daniel James Rogers (3d App. Dist., 2016) 245 Cal.App.4th 1353.
For more information about the preliminary hearing and felony cases in general, please click on the following articles:
Contact us.
Serving Torrance, Long Beach, Compton, Airport Courthouses and Other Courthouses.