What's a Criminal Street Gang for a Sentencing Enhancement?

The effects of criminal street gang activity on public safety is widely understood to be often dangerous and usually costly.  Television news channels regularly report that innocent bystanders are killed by gunfire between rival gangs.  Movies have documented the gangs of Los Angeles for years.

The Reader’s Digest Version:  Membership in a criminal street gang and acting to promote, benefit or further its interests can be by acting like one is in a gang, even if one truly is not a gang member.  This is not uncommon in younger men or teens who glamorize being in a gang, as the following case summary describes.

Our courts also recognize the problems of gangs.  Our legislature has enacted Penal Code § 186.22, which permits a judge to sentence a defendant to additional time in prison for a term consecutive to, not current with, the underlying offense.

If one merely participates in a criminal street gang, with knowledge that its members engage in or have engaged in criminal gang activity, and who “willfully promotes, furthers or assists, in felonious criminal activity by members of the gang,” the judge can sentence that person to county jail for up to one year or to state prison for sixteen months, two years or three years.  This sentencing scheme make this violation a “wobbler.”  This is subsection (a) of Penal Code § 186.22 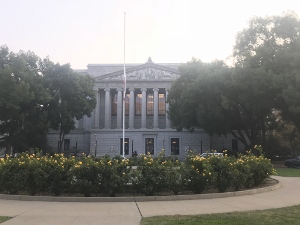 Court of Appeal Third Appellate District Sacramento
However, if one is convicted of a felony that “benefits, promoters, furthers or assists criminal conduct" by gang members, the person faces an additional two, three or four years in state prison, at the judge’s discretion.  This is subsection (b)(1) of 186.22.
When the felony is a serious felony, as defined by another section of the Penal Code (§ 1192.7), the judge must add five years to the sentence (Penal Code § 186.22 (b) (1) (B)).

When someone commits a felony that is punishable by life in prison, Penal Code § 186.22 (b)(5) directs that the defendant is not eligible for parole for fifteen years.

It was this section, 186.22 (b)(5), which was applied to Zackery Prunty in Sacramento County, following his conviction for attempted murder and assault with a firearm.  The conviction arose from a November, 2010 incident where Prunty allegedly fired six shots after another man called Prunty a “Buster,” which is a derogatory term for Norteño gang members.

Prunty had previously told the other man that he was a “Skrap,” which is a derogatory term for Sureño gang members.  Sureño and Norteño gangs are rival gangs.

The Third Appellate District, in People v. Zackery Prunty (2013 DJDAR 3962), disagreed, noting that the evidence was that Prunty identified himself as Norteño in the confrontation by showing hatred for the Sureños by shooting at an individual who was a Sureño.  The evidence also was that Prunty said, “this is Norte, fuck a Scrap, 916,” precisely what Norteños say to anger Sureños.

Therefore, the sentence enhancement was affirmed.  We present this case for our clients as a cautionary tale.  We have seen non-gang members claim to be gang members to intimidate others, really in self-defense.  We suspect this may be what Prunty did.  However, this can have terrible consequences.
The citation for the Third Appellate District Court of Appeals ruling discussed above is People v. Zackery Prunty (3d App. Dist., 2013) 158 Cal.Rptr.3d 260, 302 P.3d 573.
For more information about gang-related sentencing issues, click on the following articles:
Contact Greg Hill & Associates