Home
Other Information
Criminal Defense Articles
What Is the General Sequence of Events in a Felony Case?

What Is the General Sequence of Events in a Felony Case?

Whenever one or a loved one is facing a felony complaint, it is good to understand how the case generally proceeds from the arrest to trial, or ends early in a plea bargain.  After all, attorneys comfortably use terms like “prelim” and “pre-plea report” that seem like they belong in a foreign language.

Every case begins with an arrest or, if defendant is not arrested, with a complaint being filed and an arrest warrant for defendant being issued by the judge.  If a person is arrested, the charges the police say apply may not be what the prosecutor decides to actually file.  The district attorney can add charges or delete charges as the evidence suggests is supported.

The arrested person is usually eligible for bail, however, bail can be denied if the person faces a parole violation, a probation violation, has an immigration hold or is facing exceedingly serious charges (i.e. murder).  Otherwise, bail is a constitutional right, even if it is set so high that the person in custody cannot afford to post bail through a bail bondsman or other methods. 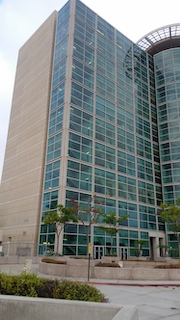 Airport Courthouse
The arraignment is when the accused is given notice of the allegations and the accused is then given a chance to plead “not guilty,” “guilty,” or “no contest.”  It is also the time when the prosecutor provides all of or most of the police report, videos (body-cams, dash-cams, i.e.), audio, photographs, the criminal history of the accused, the dispatch log, chemical testing and other documents related to the investigation (collectively called “discovery”).

If a preliminary hearing setting conference is held, defense counsel will often ask the judge to order a pre-plea report from the probation department to see if the probation department considers defendant a suitable candidate for probation.  This is done at this stage of the case in Los Angeles County and Orange County, however, in Ventura County, such a report is only prepared after a plea bargain is reached.

The preliminary hearing is a hearing to decide if there is sufficient evidence to maintain the continued prosecution of defendant.  It is also known by many as a “probable cause” hearing.  The judge will decide if this is established by listening to testimony of witnesses, including the investigating officers, however, no jury listens to the evidence.

Sometimes, it is wise to waive a preliminary hearing if one suspects charges will be added based on a witness’ testimony.

If the judge finds that probable cause has been established that defendant committed the charged offenses, defendant will be “held to answer.”  This means that in approximately two weeks there will be a (second) arraignment in superior court on the information, which is a complaint based on the preliminary hearing evidence.  At the arraignment, a trial date will be set approximately sixty days later and maybe one or two earlier hearings.

After the superior court arraignment, the case will proceed with one or more pre-trial hearings, at which time defendant may file various motions to the judge to rule upon, further negotiation takes place and trial is planned.  Trial planning may require more time for gathering of evidence (i.e. gunshot residue testing, fingerprint testing, psychological evaluation of defendant or a witness or other expert activities).  Trial may also be delayed based on the unavailability of witnesses or even counsel due to vacations, training, etc.

The last phase of the case is trial, either before a jury or just in front of a judge, known as a bench trial.

For more information about the phases of a case, please click on the following articles:
Contact us.
Serving Torrance, Long Beach, Compton, Airport Courthouses and Other Courthouses.