Home
Other Information
Criminal Defense Articles
What Is the Automobile Exception to the Warrant Requirement?

What Is the Automobile Exception to the Warrant Requirement?

When the Fourth Amendment became part of the U.S. Constitution, cars did not exist.  Later, once cars became commonplace, law enforcement discovered that crime could be furthered easily by using a car to transport illegal items from one place to another.

In a Nutshell: The automobile exception to the warrant requirement was an exception born out of the Prohibition era when police were interested in searching cars engaged in smuggling alcohol.  If a prosecutor or judge cites to such an exception nowadays, one should argue that the exception, like Prohibition, no longer applies.

In the 1925 U.S. Supreme Court case of Carroll v United States (1925) 267 U.S. 132, our judicial system adopted an “automobile exception” to the general right for the people to free from unreasonable searches without a warrant, also known as the warrant requirement.  The case itself is noteworthy for its historical place during Prohibition (the governmental decision to outlaw alcohol through the Eighteenth Amendment).

The Carroll case arose in Grand Rapids, Michigan, about 125 miles from Detroit and the Canadian border.  It was an area of intense smuggling activity of liquor from Canada.  An undercover police officer contacted George Carroll, a suspected smuggler, and said he wanted to buy three cases of whiskey.  Carroll agreed. 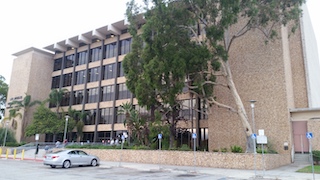 Torrance Courthouse
As Carroll and his friend, John Kiro, were driving along the highway, police stopped their vehicle and searched it, finding 68 one-quart bottles of whiskey and gin stashed behind the upholstery of the backseat.  The upholstery of the seat had been removed to create space to place the bottles and yet escape detection from a cursory visual inspection of the car’s interior.

Police had recognized Carroll’s car, an Oldsmobile Roadster, with Carroll driving first towards Detroit and then returning about an hour later.  Since undercover police had secured Carroll’s agreement to provide three cases of illegal whiskey and recognized his car going to and then returning from Detroit, probable cause to stop the car was established, the court found.

The subsequent warrantless search of the car was legal, the court found, as an exception to the Fourth Amendment’s general warrant requirement.  Carroll and Kiro were arrested and later convicted of violating the National Prohibition Act, passed to enforce the Eighteenth Amendment.

The two appealed their conviction, arguing that the warrantless search of their car was illegal.  The case made its way up to the U.S. Supreme Court, which found the search was legal because the National Prohibition Act allowed the search of a vehicle without a warrant so long as the search was not malicious and the search was based upon probable cause that the vehicle contained contraband or evidence of violating the act.  Probable cause was defined in the Carroll opinion as “a belief, reasonably arising out of circumstances known to the seizing officer, that an automobile or other vehicle contains that which by law is subject to seizure and destruction, the search and seizure are valid.”

Over time, “automobile exception” to the warrant requirement has been explained as proper because one has a lower expectation of privacy in an automobile due to the multitude of regulations under which cars operate, as compared to in one’s home, where the warrant requirement is more strictly observed.  In addition, the ease of moving a car creates “an inherent exigency” to allow a warrantless search to prevent the loss of evidence or destruction of it.

The scope of the search is limited by the areas that probable cause exists to search, which we have found means really no limit.  It means that, basically, officers can tear apart the upholstery, inspect the engine block, the trunk open glove boxes, remove seats onto the sidewalk or roadside and even remove outside panels of the car.  The search can include backpacks and other containers not even owned by the vehicle owner.