Most DUI and drug cases arise from an arrest after a traffic stop.  In DUI’s, it is often not coincidental that many stops happen just after the 2:00 a.m. time when bars close.  In drug cases, police often already have information that a suspect may have or be selling narcotics before the traffic stop occurs.  Thus, it is prudent for an attorney to closely examine the propriety of the traffic stop, which police may be all too eager to make.

Indeed, the saying “the ends don’t justify the means” is valid in our courts.

Police investigated the name “Marcus” for the local area and found information on their computer that there was a black male named Marcus who was on felony probation and lived in a nearby apartment complex. 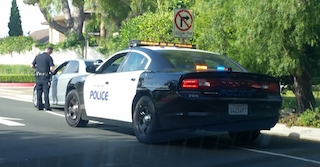 Traffic Stop
Police then proceeded to the apartment complex to look for a gold van.  As police arrived at the complex, they saw a black male in a blue sweatshirt walking toward an adjacent mobile home park.
Police then lost sight of the suspect.  Police, however, then drove toward the mobile home park and stopped their patrol car on the side of the park’s single access road.

Within two minutes of parking their car; police saw a tan car exiting the mobile home park.  One of the police officers raised his hand as the tan car approached.  The female driver of the tan car understood the gesture to be an order to stop, so she did.

The officer saw two people in the car besides the female driver.  There was a black male
in the front passenger seat and another passenger in the back, also a black male.

The police officer who stopped the car later testified that he had never seen a photograph of the suspect.  He had no idea what the suspect looked like.

However, upon stopping the car, police determined that the passenger in the back seat was “Marcus.”  Police then arrested him.

Marcus Taylor Bates was then charged with violating Penal Code § 487(c), grand theft.  He filed a motion to suppress evidence under Penal Code § 1538.5 to exclude the stolen cell phone found after what he argued was an improper traffic stop.

Bates’ motion to suppress was denied and he was sentenced, pursuant to a plea agreement, to 32 months in state prison (the low term of sixteen months, doubled because Bates had a prior conviction for a strike offense).

Bates then appealed the trial court’s ruling on his motion to suppress.  He filed his appeal in the Sixth Appellate District.

In People v. Marcus Taylor Bates (2013 DJDAR 16166), the Sixth Appellate District reversed the trial court’s ruling, finding that the traffic stop was not based on a reasonably articulable suspicion that either the occupants of the tan car or the car itself may have been involved in criminal activity.  Instead, what the officer said, when asked at the hearing of the motion to suppress, why he stopped the car: “there were people in the car.”

As the appellate court said, the deputy made the stop “based solely on the possibility that the suspect might be riding in the vehicle.”  The court continued, “while it is logical that the suspect might get into a car, that assumption does not rise to the particularized suspicion necessary to detain the vehicle and its occupants.”  A generalized suspicion is not enough.  The race of the vehicle occupant, with nothing more, does not satisfy the detention standard.  People v. Bower (1979) 24 Cal. 3d 638, 644.