Home
Other Information
Criminal Defense Articles
What is the Auto-Brewery Syndrome – A DUI Defense?

What is the Auto-Brewery Syndrome – A DUI Defense?

You or a loved one may have been arrested for DUI and had a measured blood alcohol content (BAC) far above the expected BAC for the amount of alcohol consumed.
For example, someone may have had one Coors Light or one Corona with dinner and driven home, only to be stopped for erratic driving.  The officer then forms the suspicion of DUI and has the driver submit to a blood alcohol test, which measures the BAC at 0.10%.  How can this be possible if the drive only drank one beer?

In a Nutshell:  The “auto-brewery” is a syndrome, although rare, that is well-recognized as a legitimate defense to a breath BAC measurement as being artificially elevated above one’s blood-tested BAC due to a condition in a person’s body where ethanol is produced and not eliminated, so measurable intoxication takes place.

There are multiple possible explanations for this, but one of the most intriguing explanation is the Auto-Brewery Syndrome.  While this is a rare condition, recent studies of this worldwide have captured the curiosity of many, making the disease more acknowledged.
Simply put, the Auto-Brewery Syndrome occurs when the body is producing ethanol within and cannot metabolize it faster than it is being produced and absorbed, so intoxication occurs.
The Auto-Brewery Syndrome occurs when the subject has a large amount of yeast already in the body, specifically within the lumen of the gut.  The lumen is the interior, or open, space of the gastrointestinal tract.  When a person eats starches, fruit or items with sugar, the yeast in the body devours the glucose and creates ethanol as a by-product.  This is the auto-brewery of alcohol.  Because the body usually cannot metabolize the alcohol faster than it is produced and absorbed, intoxication occurs.  Most commonly, this is at a very low level and the individual is not significantly impaired.
It is worth noting that yeast is naturally present in warm-blooded animals as a very common fungal pathogen, known as Candida albicans (C. albicans).  It is usually present at harmless levels usually in the oral cavity and digestive tract.  Almost everyone has some level of C. albicans in his or her gut.
In certain individuals, with a large amount of yeast already in the body, impairment by ethanol, the by-product of yeast breaking down glucose, is significant, but this is rare.  This will depend upon the individual’s degree of rest or stress, diet, health issues, nutritional deficiencies and other toxic exposures allowing the large growth of yeast within the body. 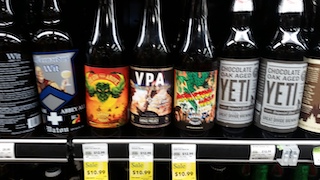 Beer Bottles
Doctors will often characterize the general overgrowth of yeast as the Yeast Syndrome.  The most common type of yeast overgrowth is a vaginal yeast infection.  Most women are aware that eating too many sugars or starches (carbohydrates), or taking antibiotics, can cause a yeast infection.  Other people may have experienced an oral infection characterized as a yeast infection.
Still others manifest such yeast overgrowth, or C. albicans overgrowth, as recurrent and persistent vaginal itching, constipation, excessive gas, abdominal discomfort, headaches, fatigue, diminished sex drive, irritable personality, memory deterioration, acne, asthma, cystitis, bladder inflammation, itchy scalp, jock itch, athlete’s foot, brittle or brown toenails, rectal tickling, skin rashes, white coated tongue and/or sinusitis (ringing in the ears).  It is important that such symptoms take place at or very soon before or after the arrest.  If medical records exist for these symptoms, that can greatly help corroborate yeast syndrome and thus, potential Auto-Brewery Syndrome.
Less commonly, this type of overgrowth occurs in the gastrointestinal tract, leading to the Auto-Brewery Syndrome, leading to poor coordination, poor balance and slurred speech, as the person is truly impaired by ethanol.
Lastly, it is important to appreciate that while many of the Auto-Brewery symptoms exist within the body, C. albicans can also exist on the outside of one’s skin where the open needle will pierce the skin and thereby allow C. albicans to flow up the needle and into the vacutainer.  Indeed, if the phlebologist does not clean the skin properly with a non-alcoholic solution prior to drawing a blood sample, the possibility of contamination by C. albicans exists.  Critics will counter that the sodium fluoride preservative will prevent such fermentation, no blood test ever tests for the presence of C. albicans and if the client has other symptoms of yeast infections elsewhere on the body, this fact can undermine the prosecution’s ability to prove the BAC beyond a reasonable doubt.
As this article hopefully makes clear, the Auto-Brewery, C. albicans and yeast syndrome are defenses that are best presented in testimony to a jury by an expert witness, but the attorney’s initial conversation with the client should explore some of the symptoms if the BAC measured is inconsistent with the alcohol consumed.
For more information about DUI defenses based on medical issues, please click on the following articles:
Contact us.
Serving Torrance, Long Beach, Compton, Airport Courthouses and Other Courthouses.