Home
Other Information
Criminal Defense Articles
What Is Split Sentencing in a Plea Bargain or As Sentence?

What Is Split Sentencing in a Plea Bargain or As Sentence?

Since AB109, the measure to realign California’s overcrowded prisons by sending more felons to county jails, split sentencing has become a more attractive option for negotiating plea bargains.  While split sentencing has not quite caught on in Los Angeles County as it has in other counties, it may gain popularity as the jails become more and more crowded over the next year.  Currently, the majority of split sentences apply to felony sentencing, but it can equally apply to misdemeanors, too.

Summary in 30 Words or Less:  Split sentencing is an attractive way to creatively resolve certain felony offenses because the consequences of a post-release violation are less severe with split sentencing than with traditional probation.

Split sentencing is an arrangement where a defendant is ordered to a specified county jail term and then a period of post-release mandatory supervision by the probation department.  It is not available for certain crimes excluded from AB109’s list of crimes punishable by county jail under Penal Code § 1170(h). 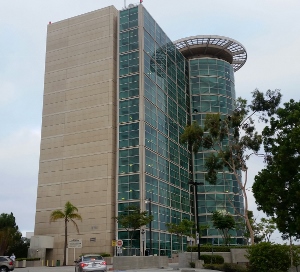 Airport Superior Courthouse
It is understandable that many see split sentencing, also known as blended sentences, as yet another example of society becoming more lax in how it punishes criminals.  Indeed, it is not an option in the more serious felonies still punishable only by state prison.  It is, however, a viable option for those felonies where the prosecution is adamant about jail time exceeding one year, but with AB109, the individual is likely to commit more offenses unless he is afforded supervised release and assisted in his or efforts to reintegrate into society.  In such cases, for example when mental health or drug addiction issues are present, both the prosecutorial interest in punishment is mixed with the defense interest in rehabilitation.

Statewide, since October 1, 2011 when AB109 went into effect and excluding Los Angeles County, forty percent of the felonies punishable under Penal Code § 1170(h) were negotiated with split sentences.  In Los Angeles County for the same period, the rate was five percent.

It is unclear why Los Angeles County has been reluctant to embrace split sentencing.  Split sentencing certainly seems to offer an option for dealing with people that probation did not work for in the past.  At the same time, a long sentence in county jail usually helps no one much unless treatment is combined to help the individual re-enter society as a law-abiding citizen.

Split sentencing can still address prosecutorial interests in making sure the individual receives no windfall.  On wobblers, the sentence to county jail for the felony can exceed a year to make the individual ineligible for Penal Code 17(b) reclassification and expungement.

Split sentencing does nevertheless raise many questions.  Will a split sentence overburden the already heavily burdened probation department?  What happens when the county jail gives an inmate an “early kick,” releasing him early?  Does the post-release mandatory supervision time then count two-for-one or is it straight time?  If so, how much of the time is two-for-one?  Does such supervision need to be pursuant to a location tracking anklet or bracelet?  The role of Penal Code § 654 in sentencing also overlays the split sentence duration calculus, especially if one of the crimes is excluded from county jail, i.e. a sex offense subject to Penal Code § 290.

Nevertheless, split sentencing is a creative way to craft a plea bargain to avoid trial, the risks associated with trial and its expense.  As county jails continue to fill up, this author believes split sentencing will find application in resolving more serious misdemeanors when the prosecution insists upon jail time.

For more information about sentencing in general, click on the following articles:
For summaries of some of the cases we have handled, view our Select Case Results.