Home
Other Information
Criminal Defense Articles
What Is Required for Police Custody so That Miranda Applies?

What Is Required for Police Custody so That Miranda Applies?

Our office is frequently told that police officers or loss prevention officers (in a shoplifting case) who spoke to the client failed to “read me my rights.”  The client or potential client then asks if this means the case will be dismissed.

The answer depends upon whether police were involved, whether there was a “prolonged detention” of the client and the adequacy of the “reading of the rights,” if for example police gave some warning to the suspect. Most importantly, the client or potential client must have then said something which conclusively establishes his or her guilt, i.e. a full confession, or an admission to some fact that, combined with other evidence, supports a conviction.

The test to decide if the restraint is sufficient to trigger the Miranda admonition is whether the totality of the circumstances would cause “a reasonable person to believe he was in custody or otherwise deprived of his freedom.”  People v. Chutan (1999) 72 Cal.App.4th 1276, 1283.  The “ultimate inquiry” is whether “a reasonable person would have felt he or she was not at liberty to terminate the interrogation and leave.”  People v. Ochoa (1998) 19 Cal.4th 353, 401, quoting Thompson, supra.

In a Nutshell: Police must read a suspect the Miranda warning if a reasonable person in the suspect’s position with the police would have felt he or she was not at liberty to terminate the interrogation and leave. 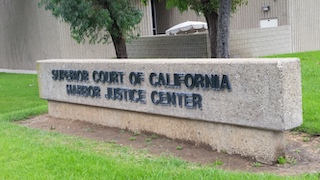 Newport Beach Courthouse
When a juvenile is involved, consideration of the age of the suspect is appropriate, as long as the suspect’s age was known to the officer at the time of police questioning, or would have been objectively apparent to a reasonable officer.  J.D.B. v. North Carolina (2011) 564 U.S. 261, 277, 131 S. Ct. 2394, 2404.    The Ninth Circuit, a federal court covering cases in California, has similarly noted the following factors as considerations, too (U.S. v. IMM (9th Cir. 2014) 747 F.3d 754, 765):
There are dozens of cases deciding what is a detention and what is not.  Perhaps one that epitomizes the degree to which a court will uphold the police decision not to give Miranda warnings is U.S. v. Crawford (9th Cir., 2004) 372 F.3d 1048, 1059.  In this case, police went to a parolee’s house and detained him, however, the court held that the detention ended when the suspect agreed to go to an FBI office for questioning.  Once there, because he was repeatedly told he could just leave whenever he wanted, the questioning did not amount to a custodial interrogation, so his statements were admissible despite no Miranda warning.

The best thing someone can do to try to suppress a statement made without Miranda warnings is to read ten or more cases on when a court does and does not suppress such statements, as there are dozens, if not hundreds of cases on this issue.  The attorney should try to analogize the pending case to past cases where a judge found the circumstances sufficient to require such a warning and argue, consequently, that in the pending case such a warning was improperly neglected or omitted.

For more information about Fifth and Sixth Amendment issues, please click on the following articles:
Contact us.