Home
Other Information
Criminal Defense Articles
What is Reckless Indifference to Human Life?

What is Reckless Indifference to Human Life?

In the context of a killing that takes place during the commission of a felony, a judge may sentence a defendant who was not the actual killer to a sentence of death or life in prison without the possibility of parole if the jury determined that the killing was a “special circumstance.”  If the jury finds that defendant was a “major participant” in the crime and acted with “reckless indifference to human life,” a special circumstance exists.

About This Article Briefly: Reckless indifference to human life is not defined by any one rule, however, People v. Clark stated that the following factors were relevant: “the defendant’s knowledge of weapons, and the use and number of weapons, the defendant’s proximity to the crime and opportunity to stop the killing or aid the victim; the duration of the offense conduct, that is, whether a murder came at the end of a prolonged period of restraint of the victims by defendant, the defendant’s awareness his or her confederate was likely to kill and the defendant’s efforts to minimize the possibility of violence during the crime.”

In 1990, California voters passed Proposition 115, which “revised the scope of capital liability for aiding and abetting felony murders by looking to federal constitutional law.”  People v. Banks (2015) 61 Cal.4th 788.
Penal Code § 190.2(d) provides that “every person, not the actual killer, who, with reckless indifference to human life and as a major participant, aids, abets, counsels, commands, induces, solicits, requests or assists in the commission of a [specified felony, including robbery] which results in the death of some person or persons, and who is found guilty of murder in the first degree therefor, shall be punished by death or imprisonment in the state prison for life without the possibility of parole is a special circumstance . . . has been found to be true under Penal Code § 190.4.”
“The statute thus imposes both a special actus reus requirement, major participation in the crime, and a specific mens rea requirement, reckless indifference to human life.”  Banks, supra, at 798. 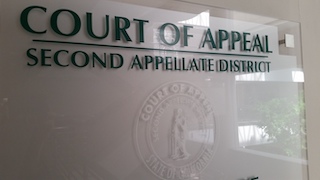 Second Appellate District Court of Appeals LA
Banks addressed what types of factors a judge should consider in deciding if a defendant was a major participant, noting no individual factor was necessary nor was any one of them necessarily sufficient: “What role did the defendant have in planning the criminal enterprise that led to one or more deaths?  What role did the defendant have in supplying or using lethal weapons?  What awareness did the defendant have of particular dangers posed by the nature of the crime, weapons used, or past experience or conduct of the other participants?  Was the defendant present at the scene of the killing, in a position to facilitate or prevent the actual murder, and did his or her own actions or inaction play a particular role in the death?  What did defendant do after lethal force was used?”  Banks, supra, 61 Cal.4th at 803 [“In cases where lethal force is not part of the agreed-upon plan, absence from the scene may significantly diminish culpability for death”], Id, at 805, fn. 5.
People v. Clark (2016) 63 Cal.4th 522 recognized there was “significant overlap” in the requirements for the major participant and reckless indifference elements in 190.2(d).  Clark noted a number of factors that warrant consideration for determining the sufficiency of reckless indifference to meet 190.2(d): “the defendant’s knowledge of weapons, and the use and number of weapons, the defendant’s proximity to the crime and opportunity to stop the killing or aid the victim; the duration of the offense conduct, that is, whether a murder came at the end of a prolonged period of restraint of the victims by defendant, the defendant’s awareness his or her confederate was likely to kill and the defendant’s efforts to minimize the possibility of violence during the crime.”  Clark, supra, at 618-623.
It is against these standards that the Second Appellate District Court of Appeal reviewed the petition for writ of habeas corpus by Tyrone Miller for the first-degree felony murder of Rene Franco and the second-degree robbery of Ana Saravia.  Miller was not the person who shot Franco, nor was he present at the scene when the shooting occurred; instead, he was convicted of murder for aiding and abetting an associate who shot Franco after snatching Saravia’s purse.  The jury at the Clara Shortridge Foltz criminal courthouse (CCB) found the killing occurred in the commission of a robbery with special circumstances.  This was in 2002.
Years later, Banks and Clark were decided.
The murder took place in 2000.  Derrick Patton and Melvin Tate were members of the 4-Deuce Crips street gang.  They had committed “follow-home” robberies with one another and others in the past.  What would happen is a “spotter” would go into a bank and observe a person withdrawing a large amount of cash.  He would then leave the bank and identify the bank customer to the others.  The “driver” would then tail the victim to his or her destination and the “getter” would take the money.  According to Tate, they did not always use a gun.  It would depend on the age, size and sex of the victim and whether the victim was alone.
On the day of Franco’s murder, Miller was the spotter, Patton the driver and Tate the getter.  Miller watched Saravia withdraw $7,500 in cash.  Miller then exited the bank and told Patton and Tate to “follow the blue van.”
Patton and Tate then followed Saravia and Franco to the car dealership.  Tate walked up to Saravia and grabbed her purse with the money.  When Franco moved toward Tate, Tate shot him in the chest and died.
Tate and Patton then drove to Miller’s house and divided the money.  Miller got $500.
The Second Appellate District Court found the evidence was not sufficient to support a finding that Miller exhibited a reckless indifference to human life.  They found no evidence that he knew lethal force was appreciably more likely than that inherent in a “garden-variety armed robbery, where death might be possible but not probable . . .”  (In re Tyrone A. Miller (2017 DJDAR 8359)).
Thus, the court vacated the special circumstance finding and remanded the case back to CCB for resentencing.
The citation for the Second Appellate District Court ruling discussed above is In re Tyrone A. Miller (2d App. Dist., 2017) 14 Cal. App. 5th 960, 222 Cal. Rptr. 3d 691.
For more information about the facts needed to show reckless indifference as required under California’s new felony murder law, please click on the following articles:
Contact us.
Serving Torrance, Long Beach, Compton, Airport Courthouses and Other Courthouses.