Some attorneys will answer the question posed in the title in a very simplistic way by saying that all murders are second degree murder unless one of eight circumstances exist.  After all, this is exactly how the jury instruction, CACI 521, reads for differentiating the degrees of murder.

About This Article Briefly: The minimum sentence for one convicted of second-degree murder is fifteen years to life in prison, whereas for first-degree it is a minimum of 25 years to life.  All murders are second-degree unless one or more of eight specific circumstances exist, as the article below describes.

To get to this jury instruction, however, the jury must first agree that defendant committed an act that cause the death of another person, or fetus; and that when defendant acted, he or she had “malice aforethought;” and, lastly, that defendant killed without legal justification or excuse.

What is malice aforethought?  It is a mental state.  It can exist because either there was express malice or implied malice.  Express malice exists when the defendant acted with the intent or goal of killing another (or a fetus).  Implied malice is less clear, but it exists when someone intentionally commits an act, the natural consequences of which were dangerous to human life, that at the time defendant acted, he or she knew that the act was dangerous to human life – and that defendant acted with conscious disregard for human (or fetal) life. 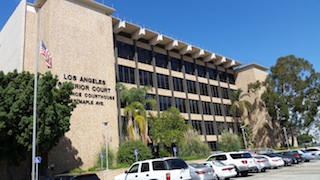 Torrance Courthouse
Malice aforethought does not mean that defendant hated the victim or even had bad feelings for that person.
It is important to also appreciate that “aforethought” does not require deliberation or the passage of any particular time between the intent to kill and the actual act.

So what are the eight circumstances that distinguish a murder as first degree murder and not second degree murder?  They are:

If someone rashly, impulsively or without consideration, committed the act, such an act is not deliberate and premeditated.

2.    Torture.  Defendant kills by torture by willfully, deliberately and with premeditation intends to inflict extreme and prolonged pain on the person to be killed while the person is alive.  The purpose of such infliction of pain is for revenge, extortion, persuasion or some other sadistic reason.  The acts must involve a high probability of death and then the cause of death then also must be the torture.

4.    Destructive device or explosive.  This involves any substance or combination of substances whose main purpose is to detonate or rapidly combust to quickly release gas or heat that causes death.

5.    Weapon of mass destruction.  This means any type of weapon that causes death to a large number of people.  It can be nerve gas, choking agents, biological agents, nuclear weapons, blister agents, blood agents or anything else that can kill many people with one exposure.

6.    Penetrating ammunition.  This means defendant murdered by using ammunition designed to penetrate metal or armor and did so knowing the ammunition was so designed.

7.    Discharge from a vehicle.  This means defendant shot a weapon from a moving vehicle at a victim outside the vehicle with the intent to kill that person.

8.    Poison.  Defendant is guilty of first degree murder if he or she uses poison intentionally uses a substance that has inherent qualities that cause death when introduced externally or into the body of the victim.