The Juvenile Alternative Work Services (JAWS) program is best thought of as Caltrans for juveniles.  Caltrans, as many are familiar with, is a form of court-ordered community service wherein probationers perform physical work such as trash pickup (“litter abatement services”) in exchange for jail time or in lieu of jail time.

Like their adult counterparts, juveniles participating in JAWS will don the orange hard hat and bright yellow reflective vests and be given a plastic bag to place trash in from the ground alongside our state’s many road, highways and waterways.  JAWS participants may also perform weed abatement, tree pruning and shrubbery removal.
JAWS itself began in 1983.  It was originally targeted for “Ricardo M.” minors (In re Ricardo M. (1975, Second Appellate Division) 52 Cal.App.3d 746.  These are juveniles who were assigned a short-term commitment to juvenile hall.  The goal is to reduce the use of detention as a sanction or corrective method because detention centers were often places where gangs recruited young, new members and youths learned new ways to commit more crime.
The minor must be at least 14 years old and no older than 18 and must be a ward of the court or recommended for wardship under Welfare & Institutions Code §§ 654, 725(a), 790(a) or 602/Home on Probation (HOP). 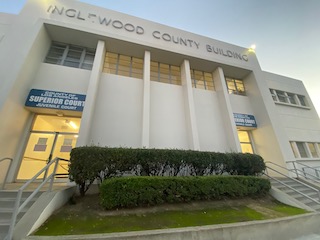 Inglewood Juvenile Court
Not every juvenile offender is eligible for JAWS.  Anyone with a serious or violent crime is assigned to JAWS at the discretion of the judge.  If the juvenile has a history of cutting off a GPS or other monitoring device, desertion or escape from a camp, or a history of gang membership, the judge can instead assign the juvenile to a detention center for public safety.  Juveniles with a history of fighting and sex offenses may also be excluded.
Once a judge orders JAWS, which can include for a probation violation (VOP), the minor will be instructed to immediately contact the appropriate JAWS office to schedule an orientation /medical appointment.  At the orientation, the JAWS staff will explain the program to the minor and his or her parent, inform them of the work dates, the dress code and identify the location of the “pick-up site.”  An order to JAWS is usually no more than 21 days.  If the individual does not meet such a short-term commitment to county jail alternative to JAWS, the individual simply is assigned to juvenile hall (or “camp”).
Participants in JAWS do not pay anything to serve in the program and nor do their parents.  In Los Angeles County, there are nine “pick-up” locations where juveniles meet before being shuttled by van or bus out to various locations to perform work.  The work is physical labor, but includes multiple breaks during the day, including for lunch.  The juvenile will sweat, have sore muscles and get tired, things they may not have experienced outside sports.  The days start before 8:00 a.m. and last until after 3:00 p.m., including weekends.
Participants in JAWS learn responsibility, discipline, team work and work ethics.  They learn to follow instructions, be on time, dress properly, get along with others and work as a group to complete a job assignment.  Such skills can later apply to employment and school.
Three of the local JAWS offices in Los Angeles County are:
If one has difficulty reaching a person at the above phone numbers, a local JAWS administrator can also be reached through PROB.JAWSProgram@probation.lacounty.gov.
Our experience with clients assigned to JAWS has always been positive.  The juvenile usually reports that the work was not too difficult and they enjoyed meeting other youths navigating the juvenile court system.  They often discuss their case(s) and what they plan to do later in life.  This talking with a peer can be extremely helpful for our client.  Avoiding detention, of course, is also greatly appreciated because a juvenile on JAWS can return home at night to sleep in his or her own bed and avoid the fighting that is common in juvenile detention centers.
For more information about juvenile sentences, please click on the following articles:
Contact us.
Serving Torrance, Long Beach, Compton, Airport Courthouses and Other Courthouses.