Home
Other Information
Criminal Defense Articles
What Is Health & Safety Code § 11550(a)? Punishment?

California Health & Safety Code § 11550(a) makes it a crime to use or be under the influence of a controlled substance without a valid prescription for the substance taken.  Defendant must show that he or she has a valid prescription for the substance at issue.  It is a misdemeanor punishable by up to a year in county jail, but we find probation of to five years is commonly afforded on condition that the individual attend 52 or more Narcotics Anonymous (NA) meetings.
This offense is one police often arrest someone for only after the person admits to being under the influence of a commonly prescribed medication, but which is also abused, i.e. Zoloft, Hydrocodone (Vicodin), codeine, or Oxycodone, or controlled substances that are listed as illegal such as heroin, cocaine, amphetamine, methylenedioxymethamphetamine (MDMA, also known as Ecstasy or Molly), amobarbital, PCP, lysergic acid (LSD), or steroids such as ketamine, nandrolone or testosterone.

The Reader’s Digest Version: A violation of Health & Safety Code § 11550(a), being under the influence of a controlled substance without a valid prescription, is a misdemeanor punishable by up to one year in county jail and a fine up to $500, although probation if often available as are Prop 36 and PC 1000 diversion programs.  Marijuana and meth are not included under 11550(a).

Marijuana is not included under 11550, nor is meth, both of which have separate code sections specific to their abuse (marijuana is now legal for those above 21 in general after Prop 64 passed).
Being under the influence of such a drug is often proven by police describing some type of behavior that is odd or unusual.  We once had a client who was prosecuted under this section and police established his being under the influence by observing him walking around a restaurant parking lot over and over.  When asked what he was doing, he explained that his car had been towed and he was at the police impound lot trying to find his car.  Our client then admitted to recently taking and then being under the influence of several controlled substances without a prescription.
Being under the influence can also be established by police describing the defendant’s pupils as being constricted (which is normal if police shine a bright flashlight in his or her eyes), sweating profusely, shaking or being unable to stand still.  Sometimes, the client will be described as being extremely rigid as well. 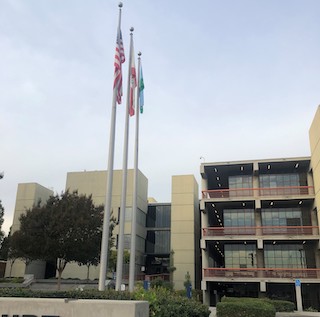 Bellflower Courthouse
It is important to distinguish certain behaviors from being under the influence and others from withdrawal symptoms.  When one is withdrawing from the drugs effects, one is no longer in violation of Health & Safety Code § 11550(a).  Likewise, one may simply be extremely tired or sick and police mistake certain symptoms of fatigue or illness as symptoms of being under the influence of a controlled substance, usually because the person drove a car in an unusual or unsafe way.
Police need to establish that the client recently and voluntarily took some controlled substance to cause such odd behavior or characteristics.  This is usually established by the client admitting to using some type of medication or illegal drug within the last hour or so, but it can be also established through a urinalysis or blood test.
Taking such a substance may not be voluntary, as we have seen in several cases we have had involving a client being slipped something in his or her drink, i.e. GHB, while at a bar.
Often, police will arrest someone for being under the influence of a controlled substance and, after the person has “come down” or slept off the effects, will release the person with a written promise to appear in court for a violation of 11550(a).  The person may have had this happen before and is smugly certain that he or she will again be punished very lightly, i.e. with 52 NA meetings, informal probation for a year or two and maybe some community service.
We then find it smart to ask further questions of the client because there is enhanced punishment for certain situations of being under the influence of a controlled substance.  For example, if the client has two or more prior convictions for violating 11550(a) within seven years and the client refuses to attend a license drug rehabilitation program, the judge must sentence the individual to county jail for a minimum of 180 days, but no more than one year, under Health & Safety Code § 11550(b), plus $70 under § 11550(d).  However, if the individual is willing to attend a licensed drug rehabilitation program, the judge can send him or there in lieu of jail.  Practically speaking, the expense of attending such a program may be an issue, so the judge can order the individual to pay all or a portion of the cost (§ 11550(c)).
If the person found under the influence is under the influence of cocaine, cocaine base, heroin, meth or PCP and has a loaded firearm, the offense become a “wobbler,” meaning the case can be charged as a felony or a misdemeanor.  If charged as a felony, the person faces state prison for up to three years and if filed as a misdemeanor, county jail for up to one year.
For more information about drug offenses in general, please click on the following articles:
Contact us.
Serving Torrance, Long Beach, Compton, Airport Courthouses and Other Courthouses.