Home
Other Information
Criminal Defense Articles
What Is Early Parole Eligibility Based on under Prop 57?

What Is Early Parole Eligibility Based on under Prop 57?

About This Article Briefly: The date for being eligibility for parole under Prop 57 is when the person completes the full term of the sentence for the primary term.  Prop 57, however, it should be emphasized, is only for those convicted of non-violent offenses.

While Proposition 57 has been widely applauded for allowing certain prisoners convicted of non-violent offenses to apply for an early parole hearing, when is such a hearing available?

The answer is provided in California Penal Code § 32(a)(1), which states, “Any person convicted of a nonviolent felony offense and sentenced to state prison shall be eligible for parole consideration after completing the full term for his or her primary offense.”  The reference to “sentenced” and “convicted” has been interpreted to refer to the conviction for which the inmate is presently serving a state prison sentence, rather than time related to a prior conviction in that person’s criminal history.

In 2006, the United States District Court for the Central District of California granted Gadlin’s writ for a petition of habeas corpus and directed the State of California to provide him with a new trial.

That trial proceeded in 2007.  In it, a downtown Los Angeles jury at the Clara Shortridge Foltz courthouse (“CCB”) again convicted Gregory Gadlin of assault with a deadly weapon.

The judge in CCB, William Ryan, sentenced Gadlin to twenty-five years to life pursuant to the Three Strikes law (Penal Code §§ 667(b)-(i) and 1170.12), plus an additional term of ten years, consisting of five years for each of his prior serious felonies, to a total time of 35 years to life. 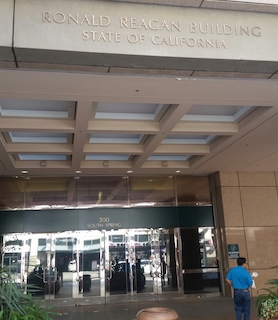 Court of Appeal Second Appellate District Los Angeles
On November 8, 2016, voters approved Proposition 57.  On November 22, 2017, Gadlin filed a habeas corpus petition in the superior court, challenging his exclusion for early parole by CDCR.
On March 2, 2018, the superior court denied his petition, finding that Gadlin was not eligible to early parole consideration because he had been sentenced as a third-strike offender.

On May 7, 2018, Gadlin filed a habeas corpus petition in the California Court of Appeal, Second Appellate District (downtown Los Angeles), again challenging CDCR’s regulations denying him eligibility for early parole consideration because he was a third-striker.

The Second Appellate District agreed with Gadlin and found that CDCR’s regulations making him ineligible because he was a third-strike offender and a registered sex offender were improper.

The Second Appellate District, in In re Gregory Gadlin (2019 DJDAR 733), found first that Gadlin’s underlying conviction for assault with a deadly weapon (Penal Code § 245(a)(1) was a non-violent felony.  The court also found that Proposition 57’s exclusion from early parole consideration for someone with a conviction for a sex offense requiring registration under Penal Code § 290 only applied to the current offense for which someone was convicted and sentenced to prison, not a prior sex offense like Gadlin had from 1984 and 1986.

It should be noted that this ruling only permits Gadlin early parole consideration, not release.  The Board of Parole Hearings will be permitted to consider Gadlin’s full criminal history, including his prior sex offenses, in deciding whether a grant of early parole is warranted under California Penal Code § 3041(b) and California Code of Regulations, Title 15, § 2449.32(c).

Gadlin has been in custody now since at least 1998, or 21 years, so an early parole hearing would be soon or even immediately (as it may have passed already), we’d think, as the full term for the underlying offense, the assault with a deadly weapon charge, is twenty-five years.
The citation for the Second Appellate District Court ruling discussed above is In re Gregory Gadlin (2nd App. Dist., 2019) 31 Cal.App.5th 784.
For more information about early parole issues, please click on the following articles:
Contact us.