Home
Other Information
Criminal Defense Articles
Prop 57 and Early Parole Hearing– How Does It Work?

Prop 57 and Early Parole Hearing– How Does It Work?

If the reader of this article is an inmate eligible for an early parole hearing under Prop 57 or the reader’s family member or loved one is such an inmate, a natural question is how does such a hearing work?

Gist of This Article: An early parole hearing is more of a review of documents than an actual hearing wherein the inmate is questioned face to face about release on parole.

The Deputy Commissioner of the Board of Parole Hearings first conducts an administrative review to determine if the offender’s release to community supervision would pose a current, unreasonable risk of violence or a current unreasonable risk of significant criminal activity.  The review is based on the offender’s criminal history, institutional behavior, rehabilitative efforts while in custody and any written statements received from the inmate, victims or the prosecutor (note, not family members or friends).
It does not appear that this review involves a face-to-face interview of the inmate or any provision whereby friends or family can offer testimony in support of the inmate’s release.  It is not like a hearing in court wherein witnesses are sworn to testify and the inmate is given a chance to say anything.
Some may state that this is not a hearing and thus, it is instead a preliminary screening procedure that could result in a denial of the early parole hearing itself.  Consequently, such a preliminary screening by the Board of Parole Hearings may be more accurately described as an early parole review, rather than early parole hearing because no hearing really takes place.
It merits mention that the inmate may have accumulated significant rehabilitative credits, i.e. for earning a high school diploma, an associate of arts degree or even a bachelor’s degree while in custody.  The inmate may have also earned significant credits by attending many hours of rehabilitative classes such as Alcoholics Anonymous (AA) or Narcotics Anonymous (NA) or anger management in custody.  However, such post-sentencing credits do not apply to reduce the time for the inmate being eligible for early parole consideration under Prop 57.  They do apply in other contexts, but not for purposes of completing the primary term. 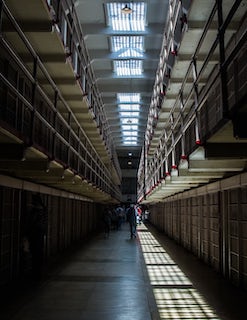 Alcatraz Inside Photo
If the Deputy Commissioner decides that the inmate can be paroled early, the CDCR will release the inmate sixty (60) calendar days after the decision.  During the sixty days, the CDCR will conduct all statutorily-required pre-release reviews, such as a check for warrants, detainers or other legal holds.  The CDCR will also provide all statutorily-required notifications, such as to the victim, the prosecutor and local law enforcement.
The inmate will then be released under supervision by the Division of Adult Parole Operations (DAPO) or a county probation department.
For those inmates who are not approved for early release, such inmates can request a review of the board decision within 30 calendar days of the inmate being served with the board decision.  The board will then review the original decision and decide whether to reverse it or uphold it.  Registered victims and prosecutors will then be notified of the review’s decision.
In addition, if any inmate is approved for release on parole, the board can at any time prior to his or her release review its decision if it contained an error of fact, an error of law or if the board receives new information that would have materially impacted the previous decision had it been known at the time the decision was being made.
Unlike the board’s parole decision for life-term inmates, the Governor cannot reverse the board’s decisions for nonviolent offenders under Prop 57.
If the offender is approved for early release, the CDCR will release the inmate 60 calendar days after the board’s decision.  During the sixty days, the CDCR will check for warrants, other legal holds and detainer.  It will also give notice, as statutorily required, to victim(s), law enforcement and the prosecutor.  The offender will then be released to the supervision of the county probation department or the Division of Adult Parole Operations (DAPO).
For more information about Prop 57, please click on the following articles:
Contact us.
Serving Torrance, Long Beach, Compton, Airport Courthouses and Other Courthouses.