Home
Other Information
Criminal Defense Articles
Are Good Conduct Credits Increased under Prop 57? How Much?

Are Good Conduct Credits Increased under Prop 57? How Much?

Good conduct credits are increased under Proposition 57 effective May 1, 2017 for almost all types of inmates as long as the eligible inmate complies with all prison rules and performs all prison duties as assigned on a regular basis.

What One Should Learn from This Article:  Proposition 57 does increase good conduct credits for inmates in state prisons, excluding those on death row or serving sentences of life without the possibility of parole.  The increase in the amount of good conduct credits varies by the inmate’s criminal history and assignment at prison, but is significant.

“Almost all types of inmates” includes inmates in not only all prisons, but also psychiatric services units, administrative segregation housing and security housing.  These provisions also apply to California inmates housed in another jurisdiction (such as Western or Interstate Corrections Compact) and correctional facilities administered by the Federal Bureau of Prisons, or facilities leased by the CDCR (California Department of Corrections and Rehabilitation).
These provisions, although effective as of May 1, 2017, were approved for permanent adoption by the Office of Administrative Law (OAL) on May 1, 2018.  What this means is that as of May 1, 2018, an inmate may have earned extra custody credits for the last year and not been aware of this.  However, as one can read below, the increased number of custody credit days is sometimes not quite as significant as one would hope.
Nonetheless, earning such extra custody credits certainly can advance an inmate’s release date if sentenced to a determinate term (a sentence of a specified length) or advance an inmate’s initial parole date if sentenced to an indeterminate term with the possibility of parole. 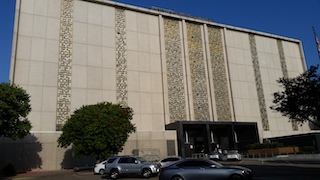 Norwalk Courthouse
Good conduct credits, however, do not apply to condemned inmates and those serving sentences of life without the possibility of parole.
Day-to-day offenders (such as those in county jails), who now receive Penal Code § 4019 credits of four days for each two days actually served, do not earn more good conduct credit under Prop 57.
Day-for-day minimum custody offenders, in contrast, who now receive 66.6% credit, will continue to receive 66% credit after Prop 57.  These inmates receive enhanced credit based on minimum custody and do not require FF training or camp placement to received enhanced good conduct credit.
However, the following categories of inmates do earn increased good conduct credits under Prop 57, as follows:

3.    Offenders with violent offenses who complete fire fighter (FF) training for assignment to camp or a firehouse and inmates assigned to fire camp in support positions (non-FF positions), who now earn 15% good conduct credit, will now earn 50% credit under Prop 57.  This means for each two days served, the inmate will receive credit for three days of credit; and

4.    Nonviolent offenders assigned to a camp or a firehouse and inmates assigned to firm camp in support positions (non-FF positions), who now earn 33% credit, will receive 66% credit under Prop 57.  This means for each three days served, the inmate will receive credit for five days credit.

Inmates can also early Extraordinary Conduct Credit where an inmate may be granted up to twelve additional months of reduction of a sentence, under the approval of the Director of the Division of Adult Institutions, if the inmate performed a heroic act in a life-threatening situation or have provided exceptional assistance in maintaining the safety and security of a prison.
CDCR can forfeit an inmates good conduct credits as a result of disciplinary infractions and rule violations.
For more information about good conduct credits, please click on the following articles:
Contact us.