Home
Other Information
Criminal Defense Articles
What Is Defrauding an Innkeeper (PC 537)?

What Is Defrauding an Innkeeper (PC 537)?

Defrauding an innkeeper is the legal way of describing a broad array of crimes such as obtaining food from a restaurant, lodging at a hotel, motel or private campground, or fuel from a gas station without paying.

Why This Article Matters: Defrauding an innkeeper is a crime of theft committed by someone not paying for a meal at a “sit-down” restaurant or using someone else’s credit card without his or her consent, or staying at a hotel or motel and then leaving before paying.  It is a misdemeanor for theft involving less than $950 and can be a felony for value stolen over $950.

While the crime may sound obsolete or a vestige from the nineteenth century, today this is what teenagers call “dine and dash” at a restaurant, but it can also include trying to use someone else’s credit card to pay without their approval.  It can be leaving a hotel without paying an outstanding bill, perhaps for movies or room service or extra nights, or by trying to obtain credit for future services without rightfully earning such credit.  This is set forth at Penal Code (P.C.) section 537(a). 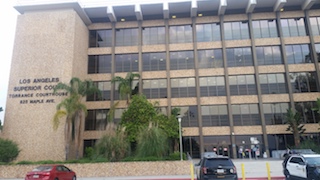 Torrance Courthouse
There is a provision within Penal Code § 537(b) that specifically applies to a ski area wherein an infraction is charged for someone who skis at a ski area without paying or who resells a lift ticket to another person when resale of the lift ticket is not authorized.
A violation of § 537(a) or § 537(b) is punished based on the value of the services or goods taken without paying.  If the value is $950 or less, the maximum punishment is a $1,000 fine, plus penalties and assessments (which can add over $4,000 to the total owed) and six months maximum in county jail.  In our experience, this maximum punishment is reserved for only a small percentage of offenders.  The person in question must have either a sophisticated plan, be a member of law enforcement or an attorney, or be quite uncooperative with police.

If the value of the goods or services exceeds $950, the crime is a wobbler.  This means it can be charged as a felony or a misdemeanor and the punishment includes up to a year in county jail or over a year in state prison. If the value is many multiples of $950, it will likely be charged as a felony.  If the person has a prior history for the same offense, and the value of the meal or services obtained exceeds $950, a felony would be likely.

This is a specific intent crime, meaning one must have the intent to defraud the gas station, restaurant, hotel or ski area.  However, no one can read one’s mind at the time (Google is not that good yet!).  Therefore, the Penal Code provides that one leaving the premises without paying establishes such intent.  This provision largely neutralizes the “Oh, I didn’t know defense.”

An honest mistake, if proven, can rebut this presumption, but this is defendant’s burden to prove.  In this regard, one is presumed to have the intent by leaving (or skiing at the ski area).  One is not presumed innocent once one leaves the premises.

Some ways to prove one made an honest mistake is to show the person had plenty of money to pay for the item or services in their wallet or purse.  A clean history and one’s age may also be considered.

If there are video surveillance cameras used for security at the restaurant or hotel, and such video shows our client engrossed in a cell phone call or text messaging, this can also support a lack of specific intent or an honest mistake.

Depending upon the facts, the savvy attorney may be able to resolve the case via a Motion for Civil Compromise under Penal Code § 1377 and 1378, or persuade the prosecutor to amend the complaint to allege trespassing (Penal Code § 602) to allow a plea bargain to a charge that is not a crime of moral turpitude.

Likewise, if the case is filed as a felony, a good defense attorney should consider a Motion to Reclassify the Case as a Misdemeanor under Penal Code § 17(b).

For more information about defrauding an innkeeper and theft offenses in general, click on the following articles:
Contact Greg Hill & Associates