Home
Other Information
Criminal Defense Articles
Dine and Dash Can Be Charged As Felony Petty Theft?

Dine and Dash Can Be Charged As Felony Petty Theft?

On Friday, May 25, 2012, Kenneth Charles Rader enjoyed a meal at an Outback Steakhouse with two friends.  The restaurant was in the City of Industry alongside the 60 Freeway and near a large indoor shopping mall.

Mr. Rader paid the $102 bill with five counterfeit $20 bills and two genuine one dollar bills.  Rader left the money on the table with the bill and walked out with his friends.

The waitress picking up the money immediately recognized that the $20 bills were counterfeit and alerted her manager.  The manager and she then tried to stop Rader from leaving.  They saw Rader walking into the nearby mall and notified police. 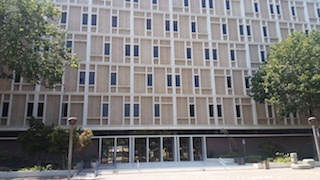 Pomona Courthouse
When police stopped Rader, he apparently knew exactly why police were interested in him, as he blurted out, “I did not pay the bill.”  When asked to identify his two friends that he ate with and may have tendered the counterfeit money, he refused.  He was then arrested.
The District Attorney’s office in the Pomona Superior Court charged Rader with second degree burglary (Penal Code § 459), two counts of felony theft (Penal Code §§ 484(a) and 666) due to his having a prior strike conviction, and two counts of forgery (Penal Code §§ 472 and 476).  Rader was convicted of all counts.

The Pomona judge hearing the case sentenced Rader to five years and four months in state prison.  The sentence was enhanced because Rader had a prior robbery in 1978, a joyriding conviction from 1993, a 2004 conviction for receiving stolen property and a 2011 conviction for second degree burglary.

Rader appealed his convictions.  He argued that he could not be convicted of two counts of petty theft, rather than just one, for using counterfeit bills on a single occasion to pay for a single meal.  Consequently, either the conviction for count 2 or count 3 had to be vacated.

More importantly, Rader appealed his conviction for violating Penal Code § 484, carrying with it a four year sentence due to his prior convictions qualifying under § 666.  Rader claimed his conduct more closely fit defrauding an innkeeper under § 537(a), which specifically prohibits obtaining food or services at a restaurant without paying, rather than the more general 484 statute.

In Fiene, defendant was convicted of violating former section 667 of the Penal Code (petty theft with a prior felony conviction).  Defendant had exited a restaurant without paying his bill, like Rader.  The appellate court said defendant had to be prosecuted under Penal Code § 537 and not § 667.  However, no California case, at least in a reported decision since, has followed Fiene.

Turning to Rader’s case, the Second Appellate District decided not to follow Williamson and Fiene because it found there was really no conflict between 537 and 484 with the 666 enhancement.  Penal Code § 537 and § 484, with 666, are different from a sentencing aspect and therefore, the prosecutor’s discretion in choosing to prosecute under § 484 and 666 should be given deference.  Moreover, defendant never alleged a conflict in the allegations at the trial court level.

Thus, the Appellate Court ruled that Rader could properly be charged and convicted of violating § 484 and 666, rather than 537.
The citation for the Second Appellate District Court ruling discussed above is People v. Kenneth Charles Rader (2d App. Dist., 2014) 228 Cal.App.4th 184, 175 Cal. Rptr. 3d. 65.  It merits mention, lastly, that Proposition 47 eliminated felony petty theft as a felony.  Now all petty theft is charged only as a misdemeanor.
For more information about defrauding an innkeeper and petty theft, click on the following articles:
Contact Greg Hill & Associates