Home
Other Information
Criminal Defense Articles
What Is California Law on Riding an Electric Skateboard?

What Is California Law on Riding an Electric Skateboard?

With the recent media attention heaped upon local cities struggling to accommodate electric scooters provided by Lime, Bird, Lyft and Uber to relieve local automobile traffic congestion by offering more convenient alternative transportation, electric skateboards are being scrutinized by local law enforcement.
Such skateboards can move a person along at over twenty miles per hour, posing the same risks to the users and pedestrians trying to share the sidewalk with such skateboard users.  Such skateboard users, like the electric scooter users, often also use public roadways, bike lanes and other walkway areas.  Collisions are inevitable, but can be minimized if one uses such skateboards with respect and caution for others.

The Gist of this Article: The recent proliferation of electric scooters has resulted in injuries to pedestrians and police seeking to prevent this by enforcing local laws concerning electric skateboards, which apply to electric scooters (like those available by Lime, Bird, Lyft and Uber).  What is the law on using such scooters?  Read the following article to find out.

The electric skateboards are fun to use and can move someone up a hill at a fairly quick speed as well, so new electric skateboard users are sure to increase and they may not have the skills needed.  Bumps, bruises and few broken bones are inevitable, even if the user does not collide with anyone else.
There are also motorized skateboards that often are loud and use gasoline with a small engine.  This article’s scope is limited to just the electric models of skateboards, which have proliferated in recent months.
This article was inspired by Justin Morrison, a young man who lives in West Hollywood and was threatened with a ticket if he used his electric skateboard.  His skateboard is about 3 feet long and has an electric motor underneath. 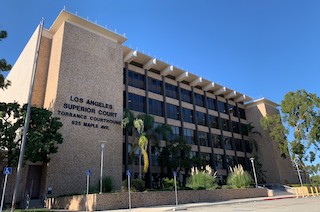 Torrance Courthouse
He was stopped by a West Hollywood motorcycle (police) officer as he was walking out of his home, holding his skateboard, before even riding his electric skateboard.  It seemed odd to him that a police officer would prioritize warning him not to use his electric skateboard, but with the clutter caused by unused electric scooters and the reported collisions between scooter riders and pedestrians, the officer may have had the same concern with anyone using an electric skateboard.  Local police no doubt have been inundated with calls for more active monitoring of electric scooter users as such scooters are being aggressively promoted in local cities.
Mr. Morrison then called our office to ask what the California law is using an electric skateboard.
California Vehicle Code § 21968(a) states that a motorized skateboard cannot be used on any sidewalk, roadway or any part of a highway, bikeway, park or trail, equestrian or hiking or recreational trial.
For purposes of this section, under Vehicle Code § 313.5, an electrically motorized skateboard is not considered a motorized skateboard if it is less than 60 inches long and less than 18 inches wide, is designed to transport just one person, has an electric propulsion system that averages less than 1,000 watt and its maximum speed is less than 20 miles per hour.  As one may know, some electric scooters have a speed control setting that one can adjust to ensure one’s speed remains below a set speed.
Vehicle Code § 21292 further states that a person shall not operate an electrically motorized board upon a highway, bikeway or any other public bicycle path, sidewalk or trail unless that person is wearing a properly fitted and fastened bicycle helmet.
So, in other words, we think the police officer who threatened Mr. Morrison was simply wrong as long as Mr. Morrison wears a properly fitted and fastened bicycle helmet, keeps his electric skateboard below twenty miles per hour and does not ride it with two or more people aboard.
We understand that police do have an interest in maintaining public safety by minimizing pedestrian versus scooter collisions, but the police officer should have instead asked our client if he intended to wear a helmet and remind him that the maximum speed for such an electric skateboard is 19 miles per hour.
This same standard would apply to electric scooters such as those provided for free by Lime, Bird, Lyft, Uber and others, although we understand some local municipalities are debating legislation to remove the helmet requirement for adult users.
Our advice to anyone using an electric skateboard is to enjoy it, use it and wear a helmet, but keep your speed below twenty miles per hour, respect all others seeking to share the road, a sidewalk or other walkway and never try to ride with another person on your board.
For more information about miscellaneous traffic and driving offenses, please click on the following articles:
Contact us.
Serving Torrance, Long Beach, Compton, Airport Courthouses and Other Courthouses.