Home
Other Information
Criminal Defense Articles
What Is Assault with a Deadly Weapon? Defenses? Punishment?

What Is Assault with a Deadly Weapon? Defenses? Punishment?

Were you charged with assault with a deadly weapon?  What must the prosecutor prove?  What is the punishment?  What are the defenses?

It is first important to know what an assault is.  Assault, under California Penal Code § 240 is defined as “an unlawful attempt, coupled with a present ability, to commit a violent injury upon the person of another.”

Brief Synopsis: Assault with a deadly weapon can be charged under more than just Penal Code § 245(a) and its four subparagraphs.  Depending upon where the crime takes place and who the victim is, it can be charged under other more specific code sections, with more punishment, as the following article describes.

There are many types of assault that are separately defined, each with its own punishment.  For example, assault with a deadly weapon (ADW) can be committed by a prisoner serving a life sentence (a “life prisoner”).  This is defined at Penal Code § 4500.  If a prisoner is otherwise in custody and is found guilty of ADW, he or she forfeits all custody time credits and may be subject to more time in custody.  When the prisoner is not in prison for a life sentence, the offense is prosecuted under Penal Code § 4501.

If one is a private investigator and one is convicted of ADW, the private investigator’s license will be suspended or revoked.  This also applies for many other people with professional licenses.  The licensee will also face possible custody time, fines, restitution (if applicable) and if probation is granted, a protective order, classes and community service. 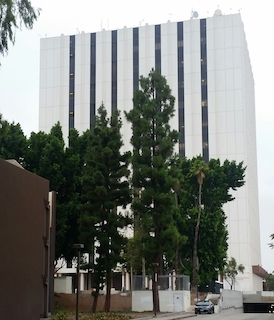 Compton Courthouse
If the victim is defined as elderly, the ADW can be classified as a form of elder abuse and then the crime is punishable under Welfare and Institutions Code § 15610.63.

When the deadly weapon is a firearm (Penal Code § 245(b)), the defendant is subject to up to a ten-year sentencing enhancement under Penal Code § 12022, which can make the punishment as long as nineteen years (ten years for the gun enhancement, added to nine years for the ADW charge using a firearm).

When one commits ADW using a weapon other than a firearm, the punishment is state prison confinement for a minimum of two years, a mid-term of three years and a maximum of four years.  Penal Code § 245(a)(1).  The crime can also be charged as a misdemeanor, meaning the maximum punishment is one year in county jail, with a fine up to $10,000.

It is important to note that when ADW is charged under Penal Code § 245(a)(1), defendant can be criminally liable either by using a deadly weapon, i.e. a rock or club, but also using force likely to produce “great bodily injury.”

“Great bodily injury” is defined as significant or substantial injuries that are physical, not emotional, financial or property damage.  The injury to one’s body need not be permanent or even too severe.  It is determined on a case-by-case basis, but factors considered are the amount of pain suffered, the required medical care, and the time to heal.  The definition of great bodily injury is at Penal Code § 12022.7.

For example, paralysis or a broken bone certainly qualifies, but so does a black, swollen eye, bloody knees, bruises, strangulation to the point where the victim almost passes out, gunshot wounds, or a dog bite if defendant instructed his dog to bite the victim.

Minor lacerations or even pregnancy (in a statutory rape case) do not qualify as great bodily injury under Penal Code § 12022.7.

Great bodily injury can subject one to a three to six-year sentencing enhancement, depending upon the severity of the injury, the circumstances of the case, the age of the victim or relative vulnerability and the length of time for the injury to heal, if ever.

The defenses to assault with a deadly weapon are self-defense, lack of specific intent, lack of willfulness or that you simply are not the suspect.

It is no defense that no one was injured.  Assault is the use of a threat or show of force to frighten another person, threaten that person or otherwise create anxiety.  Many law school professors like to describe it as a mental injury.

Other defenses are that the weapon at issue was not a deadly weapon or the force used was not enough to create great bodily injury.  These are very fact-specified defenses.

The most common defense is self-defense.  To prove this, one must show that the defendant “reasonably believed that he or she, or someone else was in imminent danger of suffering bodily injury or being touched unlawfully.”  Second, defendant must show that he or she reasonably believed that immediate use of force was necessary to defend against that danger.  Lastly, the person must show that the use of force was no more than was reasonably necessary to defend against the danger.