Street Racing As Assault with a Deadly Weapon (PC 245)?

In the early evening hours of January 9, 2009, Aren Aznavoleh was driving a red Nissan Quest minivan eastbound on Glenoaks Boulevard in Glendale, California.  Two witnesses at different locations observed his van going at about sixty miles per hour as it approached Estelle Avenue.  Just in front of Aznavoleh was a white BMV, also going about sixty miles per hour.  Both witnesses described the car and minivan as racing.

In a Nutshell:  Conviction for street racing as assault with deadly weapon by car upheld when defendant ran red light and crashed into a car entering the intersection on a green light.  Assault does not require the specific intent to injure another person, only that the defendant act in an intentional way such that the probable consequence of the act is an injury to another.

As the traffic light on Glenoaks at Concord Street, just past Estelle, turned red, the sports car kept going, zipping through the intersection.

Rafick Daroose was on Concord Street when the light for his car turned green.  He entered the intersection and was broadsided by Aznavoleh’s minivan.  Both witnesses described Aznavoleh as running the red light.  Aznavoleh apparently made no attempt to slow down before the collision.   Daroose was seriously injured and is now unable to speak, eat or swallow.  He is also unable to move the majority of his body. 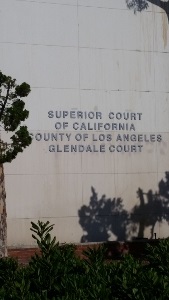 Aznavoleh had two passengers who saw the light was red and yelled two or three times for Aznavoleh to stop.  They also saw Daroose’s vehicle in the intersection just before the collision.

Aznavoleh was interviewed after the crash and admitted that he saw the light facing him was red and that he knew a collision was probable.  Aznavoleh claimed his brakes did not work. He also acknowledged that he was previously cited for speeding on Glenoaks about two months prior.

Aznavoleh was charged with assault with a deadly weapon, Penal Code § 245(a)(1), as well as reckless driving causing injury, Vehicle Code § 23105(a).  At trial, an officer who was at the scene testified that he tested the minivan’s brakes and found they were working.

Aznavoleh was convicted of both counts and the jury found true that Aznavoleh personally inflicted great bodily injury under Penal Code § 12022.7(a).  The trial court judge sentenced Aznavoleh to seven years in state prison.

Aznavoleh then appealed, contending that the evidence was insufficient to support his conviction.

The Second Appellate District Court of Appeal in Los Angeles ruled on Aznavoleh’s appeal at People v. Aren Aznavoleh (2012) 210 Cal.App.4th 1181 (slip opinion at 2012 DJDAR 15249).  It began its analysis by noting that assault with a deadly weapon requires proof of an intentional act committed with knowledge of facts that physical force would be applied to another as a direct and probable consequence of that act (People v. Williams (2001) 26 Cal. 4th 779, 782).  The appellate court further noted that Williams said there is no requirement that the actor intend or be subjectively aware of the chances of any consequence.  Assault is a general intent crime; no specific intent to injure anyone in specific is required.

Turning to the facts of Aznavoleh’s driving, the appellate court found that he deliberately ran a red light.  Aznavoleh’s testimony was that he did not intend to stop at the light, but once he saw Daroose’s car, he tried to stop.

The appellate court found this testimony as evidence sufficient to support the conviction. It was not merely evidence of recklessness, as Aznavoleh argued, because Aznavoleh was aware that the Glenoaks/Concord intersection was a busy intersection.  This familiarity persuaded the court that Aznavoleh’s conduct was intentional under the law.

For more information about assault with a deadly weapon, click on the following articles:
Contact Greg Hill & Associates