Home
Other Information
Criminal Defense Articles
What Is Arson of a Structure or Forest Land (PC § 451(c))?

Is a vacant lot alongside a highway “forest land” under California law for purposes of arson of a structure or forest land (Penal Code § 451(c))?  After all, a vacant lot usually doesn’t have majestic pine trees, deer nibbling on berry-filled bushes and squirrels jumping from tree to tree.  A vacant lot is more likely to have an abandoned, old mattress lying about and a few beer bottles laying around, tossed from passing motorists.

Summary in 50 Words or Less: Arson of a structure or forest land (PC 451(c)) is a broadly-defined, serious crime, as “forest land” can include a small fire in a vacant lot with a few weeds alongside a highway, bordered by a residential area.

Craig Kubitz was a co-worker and friend of Mr. Costella.  Kubitz called Costella one night and said he wanted to come over to Costella’s house to pick-up some money Costella owed him.  Costella told Kubitz to stop by.

When Kubitz came over, Costella took out a shotgun, shot Kubitz and instantly killed him.  Costella did not know what to do with the body, so it stayed in his apartment for five days. 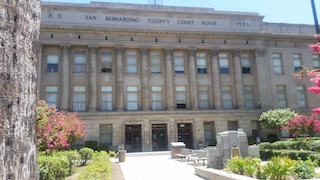 Old San Bernardino Courthouse
On the sixth night, Costella loaded the body into a pick-up truck and took it out to a spot along a highway in Redlands, near Wabash Avenue and Reservoir Road.  He grabbed a container of gasoline and then took the body to a spot in the vacant lot some distance away from the road.  He then doused the body in gasoline and lit it on fire.  He then drove away.

Firefighters responded and put out the fire.

Arson investigators determined rather quickly that another person caused the fire and Costella was arrested shortly thereafter.

The case went to trial in San Bernardino Superior Court.  Costella was charged with second degree murder and arson of forest land.  As to the arson charge, a firefighter testified at trial that the area where the body was found was “a vacant lot” with “some grass and weeds growing” and an area with “some vegetation.”  Around the victim’s body, “small bits of grass around the body” burned.  There was also “bare dirt” around the body.  There was a residential area bordering the lot on one side.

The jury convicted Costella and the judge sentenced him to 40 years to life for murder and the firearm enhancement and a concurrent term of two years for arson of forest land.

Costella appealed that there was insufficient evidence that “forest land” was burned within the meaning of the arson statute and therefore the arson conviction should be reversed.

The Fourth Appellate District, in People v. Keith Julian Costella (2017 DJDAR 3909), denied the appeal, finding that the vacant lot constituted “brush covered land” under the definition of “forest land” in Penal Code § 450(b).

The appellate court found substantial evidence from the trial court record that the land where the arson was committed was brush covered and thus constituted forest land.  In other words, the areas of just bare dirt did not disqualify the land as being forest land and small clumps of grass apparently did qualify it as so.

The court reached this conclusion after noting that the Penal Code does not define brush or brush covered.  Therefore, the court could consider “a variety of extrinsic aids, including legislative history, the statute’s purpose, and public policy.” People v. Gonzalez (2008) 43 Cal.4th 1118, 1126.  The court then considered that the dictionary (Merriam-Webster) definition of brush was “scrub vegetation” and that “scrub,” in turn, means a “stunted tree or shrub.”  Since the firefighter described the area around the body as a combination of bare dirt, grass and small brush, and small shrubs are visible in photographs, the area did constitute “forest land” under Penal Code § 451.

We believe that his appeal may not have ended as it did had the facts been more favorable to Mr. Costella.  If Mr. Costella had not attempted to burn a body of a friend he killed, and left in his house for five days (no less), we believe the court might have been far more likely to rule in Costella’s favor on appeal.
The citation for the Fourth Appellate District Court ruling discussed above is People v. Keith Julian Costella (4th App. Dist., 2017) 11 Cal.App.5th 1, 217 Cal. Rptr. 3d 343.
For more information about arson, please click on the following articles:
Contact us.