Home
Other Information
Criminal Defense Articles
What Is a Plea Subject to or Pursuant to People v. West?

What Is a Plea Subject to or Pursuant to People v. West?

If one spends time in court for a few hours, especially during the morning hours when pleas are entered, one will probably hear an attorney say that the plea is entered “pursuant to People v. West.”  What exactly does this mean?  Is it good?  Does this somehow protect the client?

The Gist of this Article: A plea entered pursuant to People v. West is a plea entered into without admitting the factual truth of the allegations against defendant, but is entered into for practical purposes to avoid more punishment if one is found guilty at trial.

People v. West was a California Supreme Court ruling back in 1970 (3 Cal.3d 595) wherein the issue was the legal status of a plea bargain.  West was charged with the possession of marijuana, a violation of Health and Safety Code § 11530.  The marijuana was found in his car.

After his motion to suppress the evidence was denied, he entered into a plea bargain to a violation of Health and Safety Code § 11557, “opening or maintaining a place for the selling, giving away or using of any narcotic.” 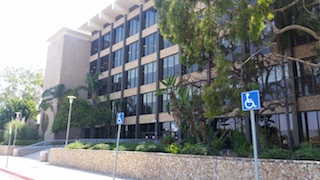 Torrance Courthouse
I
n 1968, when West was arrested, Health and Safety Code § 11530 was a felony punishable, in the absence of any prior narcotic conviction, by imprisonment from one to ten years.  If someone had no prior narcotics convictions, a violation of § 11557 was either punishable as a felony or misdemeanor.
In West’s case, since he pled to 11557 and had no prior narcotic convictions, the court sentenced him as a misdemeanant.  Indeed, this was the purpose and goal of the plea bargain for West.  However, “opening or maintaining a place for the selling, giving away or using of any narcotic,” Health and Safety Code § 11357 in 1968, was not a necessarily included, but lesser-included offense of possession of marijuana, which is at section 11530 (or was back in 1968).

Thus, when West pled to violating 11557, he did so solely to avoid prison and to avoid having a felony record.  He did not admit to “opening or maintaining a place for the selling, giving away or using any narcotic.”  He did nothing of the sort.

However, he pled “no contest” to this charge, but without admitting any factual basis for the charge.  He did not want to admit he operated a “marijuana store” as the charge implied.

When this happened, the judge allowed this to facilitate plea bargaining and encourage plea bargains to avoid court congestion with trials.  Whether this was correct became an issue for a court of appeal later when West attempted to renew his motion to suppress and the court had to look at his plea bargain for its evidentiary admissions to evaluate if it barred the appeal.

The court of appeal ruled that his plea did not bar his appeal.  While West lost his appeal of the motion to suppress, the appellate court discussed at length the value of plea bargains and how it was proper for someone to enter a plea to a charge that was not factually supported to take advantage of more lenient sentencing.

Nowadays, attorneys will plead “no contest” subject to or pursuant to People v. West.  This means that the plea is entered to avail the client of a specific plea bargain, but without admitting the type of conduct that the pled-to charge alleges.

Some attorneys enter every plea subject to People v. West even when there is zero difference between the pled-to-charge and the allegation in the complaint.  Such a practice demonstrates a lack of understanding of what People v. West said.

The savvy attorney who does such a plea correctly will really only specify that the plea is entered pursuant to People v. West when there is an amended charge that the client then pleads to for purposes of receiving a more lenient sentence.
The citation for the California Supreme Court ruling discussed above is People v. Dale Irven West (1970) 3 Cal.3d 595, 91 Cal. Rptr. 385, 477 P.2d 409.
For more information about plea bargains, click on the following articles:
Contact Greg Hill & Associates