Plea Withdraw If Not Warned of Adverse Immigration Risks

In 1992, an undercover police officer allegedly observed Defendant Rodrigo Martinez exchange a brown bindle of marijuana for $8 with another man.  Martinez was then 18 years old.  He was arrested some time later and charged with a violation of Health and Safety Code § 11360(a), transportation for sale of marijuana.

Overview:  A judge allowed a Mexican citizen to withdraw his plea because he was not advised of the adverse immigration consequences of such a plea before agreeing to the plea bargain.  When the plea is withdrawn, the judgement is then vacated, which means the case can be re-tried, but in this case, it probably was not.

Pursuant to a plea bargain, Martinez pleaded guilty to violating § 11360(a) and was sentenced to three years of formal probation, a county jail term of 111 days with credit for 111 days served (he did not bail out), ordered to pay a fine, ordered to register as a narcotics offender and ordered to undergo drug counseling. 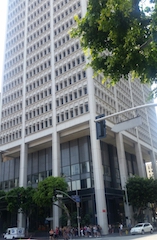 Immigration Court Downtown
The written plea bargain had many “advisements,” wherein Martinez acknowledged that, for example, by entering into a plea bargain, he waived his constitutional right to a jury trial.  One of the boxes that was on the plea form was that the conviction might lead to immigration consequences.  Martinez did not initial that block.
There was no transcript available of the judge’s taking the plea.

Penal Code § 1016.5(a) states “[a]bsent a record that the court provided the advisement required by this section, the defendant shall be presumed not to have received the required advisement.”  This required advisement is that, under Penal Code § 1016.5, the trial court must advise the defendant, before taking the plea, that if he or she is not a United States citizen, a conviction of the offense may result in deportation, exclusion from admission to the United States, or denial of naturalization.

If the advisement is not given, defendant may ask and the court is required to vacate the judgment and permit the defendant to withdraw his or her plea and enter a plea of not guilty.  Penal Code § 1016.5 (b).  To vacate the judgment, defendant must establish prejudice by showing it was reasonably probable he or she would not have pleaded guilty if properly advised.  People v. Superior Court (Zamudio) (2000) 23 Cal. 4th 183, 210.

In Martinez’s case, in 2011 (19 years later), Martinez faced deportation and so moved to withdraw his plea and vacate the judgment based on the above circumstances.  Martinez claimed, had he known about the immigration consequences, he would not have entered into the plea bargain.

The trial court, the first and lowest court to which Martinez asked to vacate the judgment and withdraw his plea, denied the motion.  It did so, explaining that had Martinez rejected the plea bargain with the warning, there was no reasonable probability that he would have obtained a more favorable result.

The Supreme Court reversed, in a victory for Martinez.  It noted from the outset that the legal standard used by the trial court, and then affirmed by the Court of Appeal, was wrong.  The Supreme Court noted that under Penal Code § 1016.5, a court is required to allow a defendant to withdraw his plea if an immigration warning is not given and defendant established prejudice.

Here, Martinez argued that he would have rejected the plea officer, insisted on negotiating a different, immigration-neutral bargain, or proceeded to trial if he was warned of the immigration consequences.

We present this summary of a reported decision because we have been successful in withdrawing pleas for those facing immigration consequences of a plea.  It is prudent, in presenting such a motion to the court, to try to contact the court reporter for the plea whose name is listed in the court minutes.  She or he may not have a transcript of the plea, which should be told to the judge in the motion.  This shows due diligence on the attorney’s part and makes the motion better.
The citation for the California Supreme Court ruling discussed above is People v. Rodrigo Marinez (2013) 57 Cal.4th 555, 160 Cal.Rptr.3d 37, 304 P.3d 529.
For more information about immigration consequences of certain convictions, click on the following articles:
Contact Greg Hill & Associates