Home
Other Information
Criminal Defense Articles
What Is a Dirk or Dagger under Penal Code § 16470?

Up in Yolo County several years ago, a sheriff’s deputy noticed a black Mustang driving at night without its front headlights working.  The deputy stopped the car and asked the driver, Adolfo Rodriguez Bermudez, for his driver’s license.  The deputy then did a pat-down search of the man and found what he thought was a knife in the man’s front pocket.

In a Nutshell: A dirk or dagger under Penal Code § 16470 is something that can be readily used as a stabbing weapon and can cause great bodily injury or death.

It was solid metal, about as think as a pen, and appeared to have been broken off from a longer piece of metal.  One end had been ground down to form a point.  The other end had red tape wrapped around it to form a handle.  The object had been completely concealed in defendant’s pocket.  The deputy later testified that the item “most definitely” could be used as a stabbing instrument and that it could inflict “injury or death.”
The man was then arrested and tried for carrying a concealed dirk or dagger (Penal Code § 21310) and driving on a suspended license (Vehicle Code § 14601.2(a)).  The jury separately found that Mr. Bermudez had a prior strike conviction and had served a prior prison term.
The judge sentenced Mr. Bermudez to state prison for sixteen months for the concealed dirk or dagger along with a 30-day concurrent term for driving on a suspended or revoked license.
Mr. Bermudez challenged his conviction, arguing that § 2310 incorporates Penal Code § 16470 and it is unconstitutionally vague.  Section 16470 provides the definition of a dirk or dagger as “a knife or any other instrument with or without a handguard that is capable of ready use as a stabbing weapon that may inflict great bodily injury or death.”
Bermudez argued that the definition in 16470 is improper as unconstitutionally vague because it (1) fails to give notice of what is prohibited, and (2) grants police and prosecutors unfettered discretion over who to pursue. 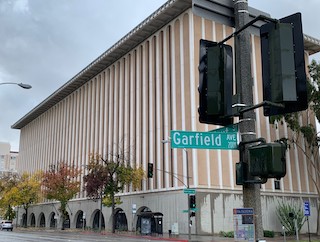 Pasadena Courthouse
The appeal was filed in the Third Appellate District and ruled upon in People v. Adolfo Rodriguez Bermudez (2019 DJDAR 9291).
The court first discussed the statute’s legislative purpose, noting that the prohibition against carrying concealed dirks and dagger was enacted to combat the dangers of concealed weapons.  People v. Mitchell (2012) 209 Cal.App.4th 1364, 1371.  By protecting concealment, third parties are protected from the risk of a surprise attack by someone carrying such a weapon.  Id.
The concealed dirk or dagger statute was formerly codified in section 12020.  Until January, 1994, there was no statutory definition of a dirk or dagger.  In 1993, the Legislature defined dirk or dagger to mean “a knife or other instrument with or without a handguard that is primarily designed, constructed, or altered to be a stabbing instrument designed to create great bodily injury or death.”  Penal Code § 12020(c)(24).
This definition proved overly narrow, making it difficult for prosecutors to establish that the primary purpose of items such as butcher knives, hunting knives or ice picks was to cause great bodily injury or death when carried for potential use as a weapon.  Concerned that gang members carrying concealed, lethal knives were “essentially immune from arrest and prosecution,” the Legislature amended the statute in 1995, replacing “primarily designed, constructed or altered to be a stabbing instrument” to “capable of ready use as a stabbing weapon.”  People v. Rubalcava (2000) 23 Cal.4th 322 (rejecting a vagueness challenge to the dirk or dagger statute as unconstitutionally vague).
This new statute raised concerns that the new statute was too broad as applied to folding knives and pocket knives.  Id.  So, in 1997, the Legislature again amended the statute, this time to provide that folding knives and pocket knives would qualify as “capable of ready use as a stabbing weapon” only if the blade was exposed and locked into position.  People v. Castillolopez (2016) 63 Cal.4th 322, 327-328.
Section 12020 was later repealed and reenacted without substantive change as section 16470, the statute now challenged by Mr. Bermudez, with specific focus on the word “may” as he argued that this wording made the statute constitutionally vague.
The Third Appellate Court rejected this argument, citing back to Rubalcava where a similar argument was made to the California Supreme Court and rejected.
We present this article for the reader, as police will often cite or arrest someone for carrying a concealed dirk or dagger and clients usually have no idea what this law covers or why it is a crime at all.
The citation for the Third Appellate District Court ruling discussed above is People v. Adolfo Rodriguez Bermudez (3d App. Dist., 2019) 253 Cal. Rptr. 3d 197.
For more information about weapons in general, please click on the following articles:
Contact us.
Serving Torrance, Long Beach, Compton, Airport Courthouses and Other Courthouses.