Home
Other Information
Criminal Defense Articles
What Facts Allow a Court to Deny 17(b)(3) Relief?

Our office often explains to clients that while a certain offense may be charged as a felony or a misdemeanor (a “wobbler”), if it is charged as a felony, we can request that the offense be recharacterized as a misdemeanor.  This request to reduce the charge level is done orally or in a written motion under Penal Code § 17(b) (or now also under Prop 64 and Prop 47 for certain wobbler offenses).

Brief Synopsis: A judge has discretion under Penal Code § 17(b)(3) to deny a request to reclassify a felony to a misdemeanor, depending upon the facts of the case and defendant’s criminal history.  The facts of the case are evaluated under the factors in aggravation and mitigation listed under the California Rules of Court at Rule 4.421 and 4.423.

Clients often assume that all one has to do is make the request and the judge will always grant the motion.  To the clients, the judge rewards us for just making the request.  The motion is automatically granted, always.
We do always tell the client that the judge has discretion to deny the request, based on the facts of the case, the client’s prior history, etc., but clients often do not seem to understand that the facts or a prior history are important considerations for the judge.
This misperception, or difficulty understanding how the facts can be an issue preventing reclassification of a felony to a misdemeanor is the reason for writing this article.
Proposition 64 added Health & Safety Code § 11361.8(e), which permits a person convicted of specified marijuana-related offenses, including possession for sale, to apply to have a felony conviction re-designated a misdemeanor or an infraction.  Section 11361.8(e) states that “a person who has completed his or her sentence for a conviction under section 11357 (possession), 11358 (planting, harvesting or processing), 11359 (possession for sales), and 11359 (transportation, transportation for sale) . . . who would not have been guilty of an offense or who would have been guilty of a lesser offense under Prop 64 had the act been in effect at the time of the offense may file an application . . . to have the conviction re-designated as a misdemeanor or an infraction in accordance with sections 11357, 11358, 11359, 11360, 11362.1 . . . as those sections have been amended or added by the act.” 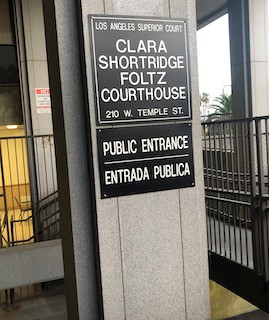 CCB Courthouse
On June 5, 2015, Job Luna Medina pled guilty in the Clara Shortridge Foltz downtown Los Angeles court to conspiracy to commit a crime (Penal Code § 182(a)(1)).  The “target offense” was marijuana possession for sale, Health & Safety Code § 11359.  At the time he entered into the plea, possession of marijuana for sale (11359) was a felony.  As the target offense was a felony, the conspiracy was a felony.
Medina was found in possession of thirty-five one-pound bags of marijuana.
In other words, this was not the usual Pre-Prop 64 possession for sale case wherein someone is found with 20 grams of marijuana (less than one ounce) and the prosecutor argues “it could be sold to someone else” and charges what is really a possession case as a sales case.  In contrast, Medina could not argue that thirty-five one-pound bags was for personal use or the prosecutor was “upcharging” him with a felony when his conduct was fundamentally misdemeanor in nature and not sales at all anyways.
However, the Adult Use of Marijuana Act (Prop 64) was then passed into law on November 4, 2016 and Medina filed his motion to reduce his felony conviction pursuant to Penal Code § 17(b)(3) and Health and Safety Code § 11361.8(e).  The judge, David M. Horowitz, denied the motion based on the facts of the case – thirty-five one-pound bags of marijuana says it all.  Moreover, Medina had prior arrests involving marijuana and other drugs.
Undeterred, Mr. Medina appealed Horowitz’s ruling to the Second Appellate District, arguing that Judge Horowitz’s exercise of his discretion was “arbitrary and irrational,” which is the standard the appellate court must find to overturn a lower court’s ruling for an abuse of discretion.
The Second Appellate District (located in Los Angeles) affirmed Judge Horowitz.  It found that Judge Horowitz properly used his discretion in way that was neither arbitrary or irrational.
We bring this ruling to the reader’s attention because it epitomizes judicial discretion being applied.  It is a good example to show our client who think that just because re-designation is possible, it is not guaranteed.  In our view of these facts, Medina had no hope of having his felony reduced to a misdemeanor based on the large quantity of marijuana involved, let alone his prior criminal history.
The citation for the Second Appellate District Court ruling discussed above is People v. Job Luna Medina (2d App. Dist., 2018) 24 Cal.App.5th 61.
For more information about reducing a felony to a misdemeanor, please click on the following articles:
Contact us.