Home
Other Information
Criminal Defense Articles
What Can One Do to Minimize Prejudicial Case Publicity?

What Can One Do to Minimize Prejudicial Case Publicity?

Summary in 50 Words or Less: The following article presents nine options an attorney or in pro-per defendant should consider to neutralize or prevent negative publicity from a fair and impartial trial.

It seems that negative publicity about a defendant in a pending case can certainly “try and convict” that defendant before the matter even begins trial.  This is obviously a huge concern to anyone facing pending charges, but what can one really do about it?

After all, the Sixth Amendment and the California Constitution, Article 1, section 15, guarantee the right to the accused in a criminal case to have a public trial (which can make the judge and prosecutor more careful it is thought).  On the other hand, the First Amendment and the California Constitution, Article 1, Section 2, protect the freedom of the press.  These two fundamental rights can seem to create a perfect storm to undermine defendant’s right to a fair trial before an unbiased jury.

After all, during jury selection, well-informed, prospective jurors may be interested in serving on the jury in a well-publicized case, but deny this to be selected for the jury.

To try to balance the coverage, defense counsel may issue a carefully-worded press release that complies with California Rules of Professional Conduct, Rule 5-120A, which prohibits statements that have a “substantial likelihood of materially prejudicing the case.” 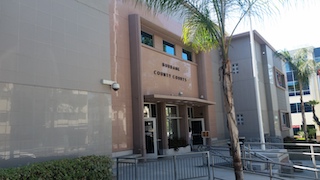 Burbank Courthouse
In addition, counsel should consider the following nine additional options, in order to protect the defendant’s Fifth Amendment right to due process in the form of a fair trial:

For more information about trial issues, please click on the following articles: