Home
Other Information
Criminal Defense Articles
What Are Proper Grounds to Disqualify a Judge for Cause?

What Are Proper Grounds to Disqualify a Judge for Cause?

As the reader be aware, one can file a peremptory challenge of a judge within the first ten days of being assigned a judge (under California Code of Civil Procedure (C.C.P.) § 170.6) or before the judge makes a finding of law or fact on the merits of a particular case without needing to prove the judge has prejudice against a party or attorney.

However, if that opportunity has passed, a party may move to disqualify a judge for cause at any time.  C.C.P. §§ 170.1, 170.5.  Such a motion is quite difficult to win, as this law office knows from having filed it.  The standard is that potential bias and prejudice must be clearly established by an objective standard according to the facts of the case.

The Gist of this Article:  To disqualify a judge for cause, one must show that facts that “a person aware of the facts might reasonably entertain a doubt concerning the judge’s ability to be impartial,” the judge has personal knowledge of disputed evidentiary facts, the judge has represented one of the parties in the case or the judge has a financial interest in the outcome of the case or a party to the case.

What are valid reasons to ask that a case be reassigned to another judge based on disqualifying a judge for cause?

We find the most common ground is under C.C.P. § 170.1(a)(6), specifically, that a “person aware of the facts might reasonably entertain a doubt concerning the judge’s ability to be impartial.”  See In re Scott (1991) 52 Cal.3d 968, 277 Cal.Rptr. 201 (judge, a cocaine user, should have recused himself from case in which defendant sold him cocaine); Sincavage v. Superior Court (1996) 42 Cal.App.4th 224, 49 Cal.Rptr.2d 615 (when judge in three-strikes case was active in prosecution of prior felonies and had stated that she would recuse herself if she learned that was so, a person knowing these facts might reasonably doubt her impartiality on matters involving priors); In re Steven O. (1991) 229 Cal.App.3d 46, 279 Cal.Rptr. 868 (judge pro tem was district attorney in underlying case; issue waived because no objection in trial court room). 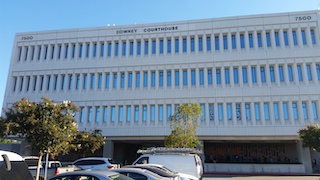 Downey Courthouse
However, sometimes disqualification is not warranted.  For example, in People v. Chatman (2006) 38 Cal.4th 344, 42 Cal.Rptr. 3d 621, the mere facts that the judge’s daughter had been robbed at knifepoint many years earlier did not by itself support doubt of the judge’s ability to be impartial in a similar criminal case.

If the judge has personal knowledge of disputed evidentiary facts, this is considered proper cause to disqualify the judge.  C.C.P. § 170.1(a)(1).  This may arise if the judge serves as a volunteer police officer and was involved in the arrest, or was a percipient witness to the crime.

Similarly, good cause exists to disqualify the judge if the judge has been counsel for any party or given advice to any party on matters involved in the action or in any prior action involving the same specific issues.  C.C.P. § 170.1(a)(2).  This often arises when a new judge takes the bench and is assigned a probation violation hearing on a defendant he or she previously prosecuted or defended.

Similarly, good cause to disqualify a judge exists if the judge’s spouse, a child or relative (or a spouse of the child or relative) is a party or counsel to a proceeding.  C.C.P. § 170.1(a)(5).

One ground we often see alleged is that “there is evidence of bias or prejudice toward a lawyer in the proceeding.”  C.C.P. § 170.1(a)(6).  Often someone will call and tell us the judge was rude or condescending toward an attorney and the client calls us, wanting to disqualify the judge based on this

The caller may also say that the judge is unable to properly perceive the evidence or properly conduct the proceeding because of a permanent or temporary impairment, which the phone caller will describe to us as “he must be mentally lacking,” or something similar.  C.C.P. § 170.1(a)(7).

For more information about changing the judge, the courthouse or the prosecutor, please click on the following articles:
Contact us.
Serving Torrance, Long Beach, Compton, Airport Courthouses and Other Courthouses.