Home
Other Information
Criminal Defense Articles
What Are Penalties and Assessments? How Much Are They?

What Are Penalties and Assessments? How Much Are They?

Summary in 50 Words or Less: Penalties and assessments are itemized additional fees added to the base fine.  Such additions commonly are for things like a court security fee, criminal conviction fee and criminal laboratory fee.  They vary by county and by crime, but can add up to nearly triple the base fine.

If one pleas no contest or guilty to almost any crime in California, there is a minimum base fine associated with the violation.  In addition to the base fine, California courts are authorized to add certain assessments and penalties that vary by county and apply only to certain types of offenses.  In total, there are forty-six penalties and assessments that can be added to a base fine.
These are directed to various accounts to pay for a variety of court operating expenses, as will be detailed below.
Every fine will have $29 added to it for each $10 in the base fine.  This means that a $100 base fine will have $290 in penalties and assessments added.  There is also a 20% state surcharge added to the base fine under Penal Code § 1465.7.
For an infraction, misdemeanor and a felony, $40 also is added the base fine for a court security fee.
There is a $35 criminal conviction fee added for each infraction and $30 for each felony or misdemeanor under Government Code § 70373.
If defendant was held in custody, but then released on his or her own recognizance by the judge, there is a $25 administrative screening fee added when defendant is later convicted.

If defendant was cited for an infraction or a misdemeanor and released at the scene, but with a promise to appear in court later, the judge can add a $10 citation processing fee under Penal Code § 1463.07 and Government Code § 29550(f). 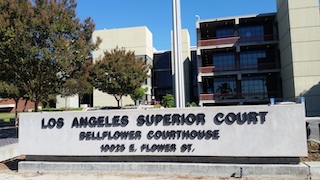 Bellflower Courthouse
If defendant failed to appear in court as ordered, even if a warrant was not issued, the court can add $15 to the total owed under Penal Code § 853.7.