Home
Other Information
Criminal Defense Articles
May Court Impose $2,450 Fine If Plea Bargain Silent on This?

May Court Impose $2,450 Fine If Plea Bargain Silent on This?

It is not uncommon for a client of ours to claim that his plea bargain included obligations such as classes or fines that he or she claims were never discussed or explained.  We then go to the courthouse and get the minute order and almost always see that the court minute order states such classes or fines were ordered by the judge.  But what if the minute order indeed does not mention such fines or a class?  Can defendant avoid paying it if the court later adds it to the sentence?  The following case discusses just such a scenario.

Article in Short Form:  Court may impose additional $2,450 fine in felony DUI case even if plea bargain does not include such a fine.

Defendant Michael Anthony Cruz entered into a plea bargain for violation of Vehicle Code § 23153 (b), felony DUI, for driving with a blood alcohol content (BAC) of 0.08% or higher and causing injury.  The plea bargain included a term of sixteen months in state prison and fines of $294. 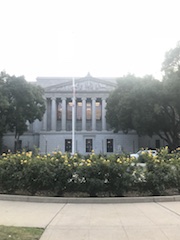 Court of Appeal Third Appellate District Sacramento
In announcing the sentence, the San Joaquin County court judge did not mention the imposition of any fines except that there would be a restitution order.  Cruz then agreed to an Arbuckle wavier (People v. Arbuckle (1978) 22 Cal. 3d 749), by which Cruz waived his right to be sentenced by the same judge that took his plea.
A judge different than the one who took his plea then sentenced Cruz.  That judge imposed the agreed upon term of sixteen months in prison and “a fine of $2,744.”  The court clerk supplied statutory references on the abstract of judgment for all of the fines that added up to $2,744.

Cruz appealed the fines to the Third Appellate District, arguing that because such fines were not part of the plea bargain terms entered into the record, the additional fine was improper and excessive punishment.  Cruz did agree later that the first $390 of the fine was permissible, as $390 is the mandatory minimum fine in a DUI with injuries under Vehicle Code § 23560.

The Third Appellate District, in considering this appeal, cited to a recent case People v. Villalobos (2012) 54 Cal. 4th 177, which held that:

“Where the parties have not mentioned the amount of the fine during plea negotiation, and where the trial court has not threatened or promised any particular amount of fine during the plea colloquy, the amount of the fine is not part of the plea agreement, and the trial court is free to impose within that statutory range.  Absent an expressly negotiated term in the plea bargain concerning the fines [there is] no basis to conclude the imposition of a fine within the statutory range constitutes more punishment than what the defendant bargained for.”

The Third Appellate District then commented that since Vehicle Code § 23560 permitted a fine of up to $5,000 when the DUI was for violation of Vehicle Code 23153 when the violation was within ten years at a prior conviction for DUI (as was the case with Cruz), the fine of $2,744 was proper.

Accordingly, the trial court’s fine was affirmed.  This case is significant in suggesting that when a plea is entered into the record, all terms should be specified.  Second, it shows that courts have very little sympathy for DUI defendants, especially those convicted of felony DUI.  This author will go out on a limb to state that if the underlying offense was for a misdemeanor such as trespassing, the ruling may not have been the same.
The citation for the Third Appellate District Court ruling discussed above is People v. Michael Anthony Cruz (3d App. Dist., 2013) 219 Cal.App.4th 61.
For more information about sentencing in a DUI, click on the following articles:
Contact Greg Hill & Associates