In Orange County DUI cases, there is an assumption that every case must resolve with a DNA sample being provided.  This is not true, as the following case summary exemplifies.
Our client, age 37, had just come back to the United States after a visit to Mexico where he worked as a DJ at a few parties.  He was on a short vacation from his job as an administrator for a home for the developmentally disabled.
He and a friend went out to a Long Beach bar to unwind the first night back and drank too much.  Our client agreed to drive and his friend snoozed in the front right seat.
As he was returning home to Santa Ana, he drove eastbound on the 22 Freeway.  It was just after 2:00 a.m.  A CHP officer was following him and allegedly noticed our client weaving within his lane.  The officer then lit up his overhead blue and red lights.  Our client exited the 22 at the Beach Boulevard exit.
The police officer immediately asked him if he had been drinking that evening.  Our client did not try to avoid the issue and flatly told the officer that he had been drinking at a bar which he was coming back from in Long Beach. 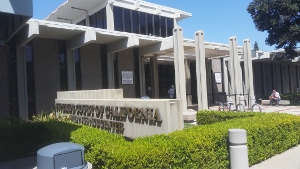 Westminster Court
After having our client perform some field sobriety tests, which the CHP officer documented as our client failing, he asked him to submit to a preliminary alcohol screening (PAS) test.  Our client declined and stated he’d like to submit to a blood test.
The officer then placed our client under arrest and took him to the Santa Ana jail, where a phlebologist did draw the client’s blood.  The blood sample was later tested and found to have a blood alcohol content (BAC) of 0.16%, or double the legal limit.
The client was held for almost eight hours before being released to go home.  The client was quite shaken up by the experience and called Greg Hill & Associates to help him negotiate the DMV Hearing and the court hearings.
Greg listened to the client explain what had happened and the client’s concerns about how a DUI might affect his job.  Greg explained that weaving within one’s lane is a common reason for a police officer to pull someone over, but the legal standard is that the weaving must be “pronounced” (People v. Perez (1985) 221 Cal.Rptr. 776, 778) and our office would want to view the MVARS (mobile video audio recording system, or “dash-cam”) tape that most CHP cars have to see if the client’s “weaving” was indeed rather extreme, or pronounced.
We would also ask to have the blood sample retested to see if the sample’s measured ethanol content was accurate.
Our office later did view the MVARS tape from the police officer’s car and saw our client’s driving.  It was not favorable to him.  We could see our client veering back and forth within the lane rather violently like a ball bouncing back and forth.  We marveled at the fact that our client’s passenger was able to keep sleeping during this time.
We also had the blood sample retested and it did come back lower, but not much lower at 0.15%.
In court, the District Attorney handling the case made an offer to our client that if he provided a DNA sample and attended the Mothers Against Drunk Driving (MADD) Victim Impact Panel, he would only have to attend the three-month alcohol awareness program (AB541) and pay the minimum court fine of $390, plus penalties and assessments, less credit for one day served toward the base fine.
Our client was pleased with the offer, but did not want to provide his DNA sample.  He was quite adamant that he did not want to submit such a sample.
Greg explained that this was standard procedure in Orange County, but sometimes, the judge would allow one to “plea in the open” and he or she would allow the case to resolve without a DNA sample.  However, Greg warned, the client may have to attend a longer alcohol awareness program.
The client responded that this was acceptable to him, as he really just wanted to avoid giving up his DNA to the government.
At the next hearing, Greg then pled in the open and the judge, as Greg hoped, indicated she would allow our client to resolve the case with a six-month (AB762) alcohol awareness program, a $390 fine, plus penalties and assessments (less credit for one day in custody) and no MADD victim impact panel (and no Hospital and Morgue program either).
Our client accepted this offer, happy that Greg knew a way around the Orange County District Attorneys and their standard marching orders to try to collect DNA from everyone.
For more information about DUI and Orange County’s unique DUI issues, please click on the following articles:
Contact us.
Serving Torrance, Long Beach, Compton, Airport Courthouses and Other Courthouses.