If you or a loved one have been charged with felony DUI (Vehicle Code § 23153(a) and/or (b)) , it can create tremendous anxiety and the need for answers is overwhelming.  For example, is prison likely?  What if someone involved dies?  This article is meant to help one better understand what to expect and guide one in knowing what one can do to help oneself.

Brief Synopsis: When can someone be charged with felony DUI?  Is prison mandatory?  How long of a DUI / alcohol awareness program must one attend?  Is there minimum jail if convicted of 23153 as a misdemeanor?  Can felony DUI be a strike?  To read answers to all these questions, please read the following article.

One can be charged with felony DUI under basically three fact patterns.  First, and most common of the three situations, one may be charged with a fourth DUI for driving with a blood alcohol content (BAC) of 0.08% or higher and / or being under the influence of drugs while having three prior convictions for DUI or a wet reckless (Vehicle Code § 23103 pursuant to Vehicle Code § 23103.5) in the last ten years.
Being under the influence of alcohol or drugs means one is driving while one’s “physical or mental abilities are impaired to such a degree that you no longer have the ability to drive with the caution characteristic of a sober person of ordinary prudence under the same or similar circumstances.” California Jury Instruction 12.65.  The drugs may be ones that are obtained illegally, by prescription or over-the-counter.  The driving must be negligent or otherwise such that one breaks another law.
It is worth noting that in a fourth DUI within ten years, the prosecutor does have discretion to charge the fourth DUI again as a misdemeanor if the facts or circumstances of the case support this.
Second, one was driving under the influence of alcohol and/or drugs and caused injury or death to another human being.  This form of DUI can be charged as a felony or a misdemeanor, depending upon the facts of the case and the severity of the injuries.  In our experience, when the injuries to another person, which can include a passenger within the vehicle of our client, are minor (just bruises or maybe a strained neck or lower back for requiring any or very little medical care), the case may begin as a felony only to be amended to be a misdemeanor. 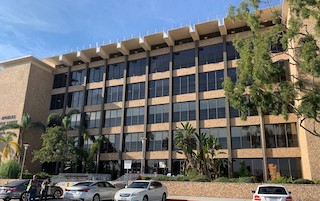 Torrance Courthouse
Third, one can be charged with felony DUI if one has a prior conviction for felony DUI, even if that person only really has one prior DUI but it was a felony.  All further complaints of DUI against such a person become felony DUI.
If one is charged with misdemeanor DUI under Vehicle Code § 23153, the punishment include informal, or summary, probation from three to five years under the following terms and conditions: 1) that one serve a minimum of five days in county jail up to a maximum of one year in county jail; 2) that one pay a court fine of at least $390, plus penalties and assessments, up to a maximum of $5,000 plus penalties and assessments; 3) that one enroll in and complete a three, six, nine or eighteen-month DUI program; and 4) that one’s driving privileges be suspended for a minimum of one year up to a maximum of three years (beginning in 2019, if one commits misdemeanor DUI in 2019 or after, one can avoid the “hard suspension” of one’s license if he or she proactively installs an ignition interlock device (IID) before the conviction).  Defendant also has to pay restitution to each person injured.
If the person is convicted of Vehicle Code § 23153 as a felony, the punishment is much more severe.  It includes a state prison term of two, three or four years, plus any sentencing enhancements that may apply.  Such enhancements can include a three to six year added term if anyone suffered great bodily injury (Penal Code § 12022.7), plus one more year for each additional person who suffers great bodily injury or death (Vehicle Code § 23558).  This means one is given a “strike” (under California’s Three Strikes Law) on one’s criminal record for each person who suffers great bodily injury of death.
In addition, one must pay a court fine of a minimum of $1,015 plus penalties and assessments up to a maximum of $5,000, plus penalties and assessments.  One must also enroll in and complete either an 18-month or 30-month court-approved DUI program.  One is also deemed a Habitual Traffic Offender for three years.  Lastly, one’s driving privileges are suspended for five years (however, beginning in 2019, if one commits felony DUI in 2019 or later, one may be able to avoid the “hard suspension” of one’s license by installing an ignition interlock device before the conviction).
The defenses to felony DUI are very similar to those involving misdemeanor DUI.  We do like to point out, however, what is often glossed over by many attorneys is that a necessary element of felony DUI, in contrast to misdemeanor DUI, is that the prosecution must show defendant drove in a negligent manner and/or violated another law while driving.  Mere driving is not enough.  We also find it is worthwhile to clarify the severity of the injuries.  Often, alleged “victims” will claim they are injured worse than it turns out they are actually injured.
For more information about DUI, please click on the following articles:
Contact us.