Our client, age 29 and with a moderate criminal history, admittedly punched out another patron of a Studio City bar as the two were exiting the premises.  The “victim” had been taunting our client for several minutes, “head-butting” him in a half-playful, half-aggressive manner, seeming to invite a response.  The entire event was caught on the bar’s security cameras, which we showed to the Van Nuys District Attorney and no case was filed.

A full-scale fight then erupted with the bar owner and bouncers from the bar becoming involved.  The initial aggressor was not injured, but our client suffered a bloody lip.

The Point of This Summary:  Sometimes, a bit of hustle and legwork by an attorney can prevent a criminal filing of a case.  While this did take place in this particular case and justice was served, it often does not take place with just as much hustle and effort.  This case summary is a good example of what an attorney can do to preserve such a chance.

Police officers swooped in almost immediately and our client was arrested on the spot.

In our experience, there are often police sitting in their squad cars nearby to arrest people leaving the bar for DUI and the same police here indeed were close enough to be on scene within two minutes.

After our client was bailed out for felony assault and battery (Penal Code sections 242 and 243 (d)), he came to our office upon the recommendation of one of our prior clients.  After listening to our new client and advising him of various legal strategies, we immediately got in contact with the bar and demanded that it preserve the security camera footage from the front door entry and exit area for the evening at about midnight, which is when our client was leaving.  Our office personally delivered a demand to preserve evidence letter to the hand of the bar’s manager, looking him in the eye as we handed the letter to him.

We followed up several times with the manager to confirm he knew we really did want the video tape(s) from the exit area of the bar, a series of steps that led down to a parking lot.

We also got in contact with the Van Nuys Police Department detective handling the investigation to explain the mutual combat and self-defense issues that were relevant.  We gave him the names, addresses and telephone numbers of several witnesses who were with our client the evening of the incident, but who the police never spoke to at the scene (but could have).  Instead, they simply arrested our client and hustled him away to the police station. 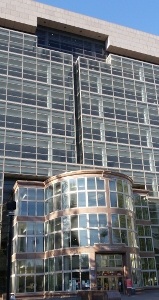 Van Nuys Superior Courthouse
We also contacted the Van Nuys District Attorney to ensure he knew what had really occurred.  Greg coincidentally knew the prosecutor from an earlier case and the two were friendly, so the prosecutor and Greg spoke easily about the incident and the other witnesses to the fight that were not identified in the police report.

The bar owner had told the police at the scene that he would gladly provide the security camera film, but after our office also demanded it, he claimed he could not find it.

At the arraignment, our office was rewarded for our immediate action, as the District Attorney reported that it was not filing charges at all.

It merits mention that our office tries to follow this script in almost all bar fight cases, but it rarely resolves as nicely as it did here.  A bit of luck is often needed.  Yet we certainly do our best in each case to make it possible.