Must Fingerprint Records Be Destroyed If Court Grants PFI?

In 2010, Karen Christiansen was arrested for various offenses, including several counts of a conflict of interest (a violation of Government Code § 1090).  At the time, the Beverly Hills Police Department took her fingerprints and picture as part of the booking process.

Summary in 50 Words or Less:  Fingerprints taken during booking for an arrest and later case that ultimately resolved with defendant being found factually innocent are subject to destruction.

The case was later filed in the Airport Courthouse in Los Angeles County.  The jury there found Christensen guilty and she appealed.  At issue was a four-year prison sentence and a $3.5 million restitution award.

On appeal, the verdict was reversed and then dismissed.  This was a significant victory for Ms. Christensen, a former Beverly Hills Unified School District facilities director, because the case alleged she misused her public office for personal gain.  She felt vindicated, but that feeling was not sufficient for her.

Christensen therefore then filed a Petition for Factual Innocence.  Such a petition seeks a judicial determination that she was factually innocent of the charge under Penal Code § 851.8.  She wanted to feel fully vindicated and found factually innocent by the judge. 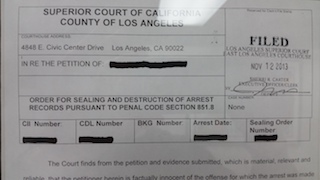 PFI Granted Signed Order
Judge Stephen Marcus granted the petition, but refused to order the destruction of the fingerprints taken of Christensen.  Marcus ruled that under Penal Code § 299, the Beverly Hills Police Department could keep the fingerprints on record.  Marcus did rule, however, that police had to destroy her DNA sample.  The court also ordered that the court return Ms. Christensen’s passport to her, which she had surrendered at her arraignment.
Christensen then appealed to the Court of Appeal, which reversed Judge Marcus and ordered the fingerprint records also destroyed.

The prosecution argued that fingerprints could be retained because they are only used to track arrests and convictions, adding that Ms. Christensen cited no authority to allow the destruction of fingerprint records.

The appellate court next turned to Judge Marcus’s ruling under Penal Code § 299 that the police did not have to destroy the fingerprints.  The court noted at the outset that the People did not appeal Judge Marcus’s finding the Christensen was factually innocent and that the order that “the arrest record” be “sealed and destroyed.”

The appellate court then noted that the People presented no argument that fingerprint impressions are exempted from the arrest record (it was unclear if this observation by the appellate court was a tit-for-tat for the prosecution’s argument that Christensen cited no authority for her position that fingerprint records should be destroyed).  It also found that when an arrestee like Christiansen is ultimately found factually innocent within the meaning of § 851.8, the statue requires that the records be destroyed.

This statutory requirement “reflects the legislature’s judgment that arrests in cases like this one are not to be tracked otherwise, the requirements that the arrests of such arrests be destroyed would be nonsensical.”  This interpretation of the statute is perhaps the biggest point of this article and the holding of the appellate court.

The appellate court concluded its analysis by responding to the People’s contention that Christensen cited no authority in support of her argument that police must destroy the fingerprint records.  The court simply said Penal Code § 851.8 is that authority.

Consequently, the appellate court reversed that trial court’s order that “the fingerprint impression obtained at the time of Christensen’s arrest is ordered retained.”  The court also directly the trial court to enter an order granting her request to destroy all fingerprint impressions obtained at the time of her arrest.
The citation for the Second Appellate District Court ruling discussed above is People v. Christiansen (2d App. Dist., 2014) 230 Cal.App.4th 178, 178 Cal. Rptr. 3d. 396.
For more information about the issues in this case, click on the following articles:
Contact us.