Home
Other Information
Criminal Defense Articles
How Does One Remove a Name from the Megan’s Law Internet Listing?

How Does One Remove a Name from the Megan’s Law Internet Listing?

Our office has had several registered sex offenders call or come to our office asking if it is possible to have their name removed from publication on the Megan’s List website, as provided for under Megan’s Law (Penal Code § 290.46).

The individual is usually fearful of a neighbor, employer or colleague finding one’s name, or parents of their child’s classmate and spreading the information, damaging their reputation and stigmatizing his or her child.

In a Nutshell:  Removing one’s name from the Megan’s Law Internet listing is not available for everyone who is a registered sex offender and listed on the site, but if one is convicted of an offense that does not neatly fit into one of the specified eligibility criteria, a good attorney can make a significant difference.

Often, the client was never convicted by a jury.  Instead, a plea was entered into based on a practical decision to avoid trial and the risks of a prison sentence, even though the victim and the facts of the case were greatly disputed (most commonly a “he said, she said” situation).  However, in the “Me Too” atmosphere that may have been present at the time, trial would have been unwise.  Someone reading the listing of names, however, certainly never knows this and naturally, they may imagine our client was a serial rapist when he or she was far, far from any such conduct. 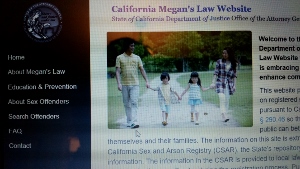 Removing one’s name from the Internet is not available to everyone listed on the website.  If the client was sentenced to state prison, removal is not available.  This is often the biggest disqualifier.  Otherwise, removal is only available for someone convicted of violating: 1) Penal Code § 243.4(a) (Sexual Battery by Restraint); 2) Penal Code § 647.6 (Misdemeanor Child Molestation, formerly 647a); 3) a felony violation of certain child pornography laws set forth at Penal Code §§ 311.1 or 311.2(b), (c) or (d), 311.3 or 311.4, 311.10 or 311.1 if a certified copy of a probation report states the victims were at least sixteen years old ; or 4):
1.    An offense that did not involve penetration or oral copulation;

2.    An offense that did not involve one’s child, stepchild, grandchild or sibling; and

The fourth broad category, with its three requirements, may seem quite accommodating, but it is worth noting what it necessarily excludes.  Probation is unavailable for anyone deemed a sexually violent predator (“SVP”) under Welfare and Institutions Code § 6600 or anyone convicted of murder (Penal Code § 187), kidnapping (Penal Code § 207) or rape when accomplished through force or fear (Penal Code § 261), among other offenses. 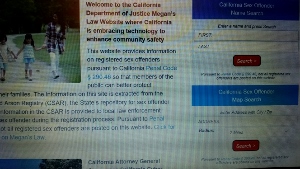 If one believes removal is possible, one must complete an Application for Exclusion from Internet Disclosure, form CJIS 4046D, and submit it to the California Department of Justice.  When one is basing their application on the fourth category described above (not involving 243.4, 647.6 or child pornography laws), one must submit a copy of a probation report, a pre-sentence report or other court documentation that shows the offense did not involve penetration or oral copulation and that the offense did not involve one’s child, stepchild, grandchild or sibling.

A letter from the attorney who represented the client during the case is also acceptable and this is where the client can present documentation showing rehabilitation, mitigating circumstances, how the Internet listing has affected the client and so forth.  Such a letter can be comprehensive, stating why removal from the website is “the right thing to do,” given how long the client has been publicly identified, the age of the client, the client’s employment situation, the client being barred from participating in community events (such as AYSO soccer, Boy Scouts, Little League, for example) and how the client’s name on the Internet has caused punishment to the client’s family.

A ruling on the application, once it is submitted, typically takes thirty days.

It merits mention that SB358, the new law concerning less-than-lifetime time periods for sex offender registration, to become effective in 2022, does not affect or address removal from the Megan’s Law website.