Our client, age 55, was going through a tough period in her life, a “perfect storm” as the cliché is used.  Her father passed away, menopause was causing major swings in her mood and weight and her daughter was pushing back from her requests to spend time with her granddaughter, age 3.  Moreover, the real estate market was stagnating due to Covid-19 and her work as a licensed real estate salesperson, was evaporating.
The combined effects of all these effects, significant alone nonetheless, came to a crescendo one afternoon when she went unannounced to her daughter’s home on Tenth Street in the 700 block.  Our client greatly enjoyed taking her granddaughter on walks, as it allowed her to relax amid all the turmoil.
After our client knocked on the condominium door, her daughter ignored her.  This made our client angry, so she kept knocking for 20 more minutes.  This had no effect on the door opening, but it did cause our client’s daughter to call the Hermosa Beach Police Department.  Thirty minutes after this call, our client remained standing on near her daughter’s front door, still knocking (now for 50 minutes).
Police arrested our client on suspicion of violating Penal Code § 602(o), trespass and refusing to leave, and took her to the Hermosa Beach Police Department.  She was booked and held for a few hours for observation, as she was crying and confused.  She tried to explain to the police that she was going through menopause and some of the medications were too strong and often caused her to do odd things.
Ultimately, she was released after signing a promise to appear in the Torrance Courthouse in about two months. 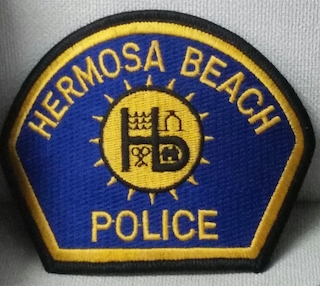 Hermosa Beach PD Patch
The client called our office, explaining that she was genuinely concerned about a conviction for misdemeanor trespassing and how this might affect her real estate salesperson license.  The client also explained that her daughter was no longer angry at her and would sign a declaration so stating.  Greg further explained how he hoped to resolve the case, which he saw much more as a case of disturbing the peace for the noise caused by the knocking and how, with a bit of luck, the case might resolve for an infraction.
Greg then spoke with the daughter, who confirmed this and further explained how her mom was struggling with the loss of her father, menopause, trying to lose weight and the downturn in the real estate market due to Covid-19.  However, now her mom had adjusted her menopause medications and was acting normal and was not trying to lose weight in any dramatic fashion.
Greg then prepared a declaration for the daughter to sign, which she did and returned it to Greg to take to court.
Greg then appeared for the arraignment on the assigned date and spoke with the Redondo Beach City Prosecutor, whose offer to resolve the case was a plea bargain to misdemeanor trespass and to be placed on three years of informal probation.  Greg explained to the prosecutor that the client was a licensed Real Estate Salesperson and showed the prosecutor the license, printed out from the California Department of Real Estate website.  Greg also showed the prosecutor the declaration from the daughter and asked to resolve the case for an infraction for disturbing the peace so such a conviction would not affect the client’s means of making a living.
The prosecutor’s response was no, but suggested my client pay the Hermosa Beach booking fee ($379) and return with a receipt showing it was paid.  She said if this was done, she might reconsider the offer.
Greg returned from court and explained to the client what the prosecutor’s initial plea bargain offer was and her suggestion that the client pay the booking fee.
Our client immediately paid the booking fee and gave Greg a copy of the receipt.
Greg then returned to the Torrance Superior Court perhaps four weeks later and showed the prosecutor the receipt from payment of the Hermosa Beach booking fee.  The prosecutor then kindly agreed to amend the complaint to allege a count two, an infraction-level violation of Penal Code § 415(2), and dismiss count one, the misdemeanor count for trespass.  The new plea bargain would be that the client could plea to count two and pay a court fine of $25, plus penalties and assessments (total of $125).  The client accepted this offer, greatly appreciative of the work that went on to reach this point so as to not affect her real estate license.
For more information about the issues in this case, please click on the following articles:
Contact us.
Serving Torrance, Long Beach, Compton, Airport Courthouses and Other Courthouses.