What Is Trespassing (PC 602)? Defenses? Punishments?

Trespass means many things to many people.  To one person, it means walking into an area posted with signs that state, “No Trespassing.”  To others, it means walking into a business, loitering for a long time and then leaving without making a purchase.  To others, it may be a homeless person living for several days, or even weeks, at an empty foreclosed house without permission.

What to Take Away:  Trespassing is the willful entry by someone onto the property of another with the specific intent to interfere with that person’s property rights.  The entry can be consensual.  It can be charged as an infraction, misdemeanor or even a felony.

These ideas are all correct to some degree.  Under California Penal Code § 602, trespass is defined as willfully entering another person’s property with the specific intent to interfere with that person’s property rights.  “Willfully” means on purpose or deliberately.  “Specific intent” means that one intends to not only do something, but that one intends the consequence of the act, i.e. loitering in a business with the consequence of interfering with that location’s business.

The defenses to trespassing are fairly logical from the definition of trespassing.  If one enters property that is not marked as private property, i.e. while one is hiking or mountain biking, and you have no idea that you are on private property, the “willful” element is absent. 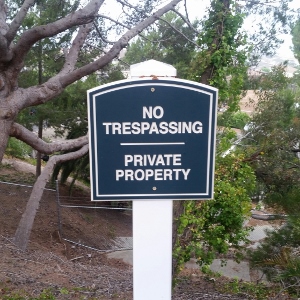 More common, however, is a defense to the “specific intent to interfere with another’s property rights.”  For example, if someone is outside a courthouse, but on the steps of the courthouse property, and one is leading a protest of a certain judge, it is not trespass unless the protest interferes with people trying to get into and out of the courthouse.

Similarly, it is a defense to trespassing that the owner allowed entrance of the defendant onto the property.  This can be a limited defense in that if the scope of the consent is exceeded by defendant, the defense evaporates.  For example, if one is allowed to enter a store, one cannot loiter in the store for five hours, burdening the store staff with monitoring you all the while.

Likewise, in the opposite manner, it is not trespassing unless one deprives the owner of his property rights for a “substantial, continuous period of time.” People v. Wilkinson (1967) 248 Cal. App. 2d. Supp. 906, endnote 16.  In Wilkinson, a transient slept overnight on a “very large ranch” in his sleeping bag.  The court noted that his occupation of roughly twenty square feet was not trespassing because the deprivation was short-lived and almost unnoticeable.

A misdemeanor violation of Penal Code § 602 carries with it up to six months in county jail and a maximum $1,000 fine.  However, there are limited exceptions to the six month cap. For example, if someone refuses to leave a battered women’s shelter, there is a one year maximum penalty.  Penal Code § 602(w).

When trespass is charged as a felony, the trespass is usually related to criminal threats (Penal Code § 422).  A common scenario is when defendant makes a threat and then, within thirty days, enters the other person’s home or workplace with the intent to carry out the threats. When this happens, felony trespassing is charged and there is a minimum 16 month sentence to a maximum three years sentence in state prison.  Fines also can reach $2,000.

With an infraction, defendant will simply pay a fine, which is usually quite small.

For more information about being in court for trespassing, click on the following articles: