Our client, age 44, and his wife were going through a tough divorce caused by our client catching his wife having multiple extramarital affairs and using methamphetamine, as well as drinking to excess.  It was a very sad situation, as the couple had two children, ages six and nine, a home in Torrance and our client had a very good job with a major bank.
The wife made no secret about her affairs and openly told others that she wanted a divorce with a big monthly alimony payment and child support to “set her up for the rest of her life.”
She spoke with several other women and hatched a plan to get a family law civil restraining order by claiming domestic violence and then fabricate a violation by her husband, as well as charges of domestic violence.  She wanted to do everything she could to maximize her chances at having child custody and receiving the maximum alimony and child support, she hoped so she would never have to worry about working again.
She therefore fabricated a domestic violence incident, submitted her story to the court and requested a family law (civil) restraining order, which was granted at the Torrance Court.  Our client was never served with the papers requesting a permanent such order after the emergency restraining order was granted. 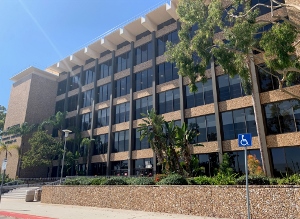 The wife submitted a false proof of service for notice of the hearing on the permanent restraining order, so our client did not attend the hearing and the order was entered.
The wife then waited for her husband to violate the order by coming within 100 yards of her, which he did.  She called the police and he was arrested.  He protested that he was never served with the protective order, so police served him with it and he was released.  He then had notice of the order, but he needed to contest the restrictions that were imposed on him.
Our client, however, was interested in divorce, not reconciling with his wife.  After speaking with his family law attorneys for the divorce (he filed against her), he decided not to contest the family law civil restraining order.  He was agreeable to staying away from his drug-addicted, promiscuous wife.
However, he still wanted to be part of his children’s lives and this is where the case turned into a criminal case.  One day, he called and texted his daughter, but received no response.
In fear for her safety and well-being, he decided to go to the family home (where his wife was living) to find his daughter and make sure she was fine.  When he got to the house, he found his wife having sex with some unknown man again.  The wife called the police and our client was charged with violation of Penal Code § 166(a)(4), violation of a family law restraining order.  Our client was arrested and openly admitted to the police that he went within 100 yards of the home and knew he should not, but he was worried for his daughter’s safety.
He was released after a night in jail.  His wife then texted him and invited him back over to the home for a birthday party going on for their son.  Our client, believing that if invited by the protected person to come to the home, he could do so legally.  So he went there for the party.
The wife then called the police again, this time claiming that our client hit her and violated the civil restraining order again, the second day in a row no less.
The police then arrested our client again, remarking that our client needs to learn his lesson.
The Torrance City Prosecutors Office filed a separate misdemeanor complaint for each violation, one for each day.  The client was shocked by the two criminal complaints, so he called Greg Hill & Associates.  In one of the complaints, it was alleged that our client committed domestic violence against his wife and the police report identified a family friend at the birthday party as a witness.  The client’s wife could show no visible injuries because our client actually never touched his wife.
He met with Greg Hill and explained the sad situation.  Greg Hill then went to court and had both cases consolidated to the same court day as a first order of business.
Greg urged the client to go to trial, as he was innocent.  However, the client badly wanted closure of the whole situation and did not want to risk a verdict against him in each case because he was skeptical a jury would recognize his wife’s lies.
Greg then negotiated a plea bargain over six months of court appearances in which the client agreed to plea no contest to violation of one count of Penal Code § 166(a)(4) in each case, attend a 52-session batterer’s program, make a $500 domestic violence fund “donation,” and pay court fees of $220 in each case.  The client also had to pay the Torrance police department booking fee in each case.  The plea was entered under People v. West, so the plea could not be used to prove liability for the conduct at issue.
The Torrance City Prosecutor dismissed all other counts, which were for violations of Penal Code §§ 273.6, 273.5 243(e)(1) and 242.
We bring this really sad case to the reader’s attention to show an example of a case wherein our criminal justice system is less-than-perfect and subject to mischief, but having an experienced criminal defense attorney can minimize damages and limit a client’s exposure without going to trial.
For more information about violation of a civil protective order, please click on the following articles:
Contact us.
Serving Torrance, Long Beach, Compton, Airport Courthouses and Other Courthouses.