Our client, age 24 and on formal probation in two separate matters, went to a Torrance billiards hall to drink some beer and play some pool.  At some point in the evening, he got into an argument with the bar manager and decided to express his displeasure with the bar in an etching on the wall of the bathroom stall in the bar.

As our client was carving his message into the wall of the bathroom stall, he made a lot of noise and another person using the bathroom heard him.  That person notified the manager, who went to the bathroom to investigate.

A fight ensued in the bathroom and the bathroom sink was broken from the wall as our client and the manager tried to push or pull each other to the ground.  Police were called and arrived quickly, as this particular bar is less than a mile from the Torrance Police Station.  Our client learned that police were enroute, so he ran out from the bar and jumped into his car.  Within seconds police pulled into the same parking lot and our client sped away.

Police at first did not realize that their suspect had just left, but once so advised, they quickly followed our client, with their sirens wailing.  Our client exited onto northbound Hawthorne Boulevard and drove just over a block before turning right onto a side street, where he crashed into a light pole.  Officers tried to subdue our client, but he fought with them even after he was taken to the ground.

In checking our client’s pockets, they found a baggie of cocaine and over $1,300 in cash.  Our client was also drunk.  The client was arrested, taken to the Torrance Police Station, booked and then bailed out immediately by his mom.

The very next day, the client retained Greg Hill & Associates.  Greg had represented the client on a prior case that was dismissed by the prosecutor, so the client was hopeful for a similar result.

Greg first went to the Torrance Police Station to demand the report and speak in person to the handling detective about our client’s driving being defensible as an act of necessity and duress because he was trying to escape being beaten up from the manager and others inside the bar.  Greg also described how the bar manager started the fight with our client in the bathroom.

(It merits mention that with the passage of Prop 47 in November of 2014, the 11350 charge would have been filed as a misdemeanor, but this case took place earlier, so it was filed as a felony)

Greg then appeared in the Torrance Superior Court with the client at his arraignment.  Luckily, the District Attorney seemed to understand that our client would probably be hammered in probation violation hearings in other courts, so she did not insist upon severe punishment in this case. 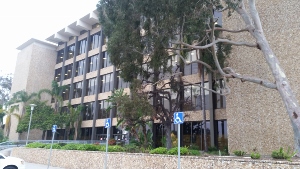 Torrance Superior Courthouse
Greg explained how our client’s many legal troubles came from abuse of alcohol and drugs, so he suggested an in-patient treatment program in a San Pedro facility our client already had mentioned.  It took several court appearances to convince the District Attorney that this was the most fitting solution to our client’s many legal problems, but in the end, the prosecutor did agree to Greg’s suggestion.

Our client faced a maximum of 12 years in state prison for his evening of fun.  Instead, he agreed to a plea bargain to plead no contest to felony vandalism and possession of a controlled substance and was placed in a six-month residential drug and treatment program in San Pedro.

The client stated he was “eternally grateful” for avoiding prison.
For more information about resisting arrest, vandalism and Prop 47, click on the following articles:
Contact us.