Our client, age 21, was racing his friend southbound on Hawthorne Boulevard in Torrance at about midnight.  As he was approaching Torrance Boulevard, he lost control of his car and crashed into a roadside electrical panel.  The ensuing damage caused police to estimate his speed as having been easily in excess of 70 mph.  Making matters worse, while weaving in and out of traffic, he lost control of his car and also collided with his friend’s car.

Our client’s car knocked over a power pole and power box, coming to rest in front of a furniture business on the west side of Hawthorne.
His vehicle hit the outer facade of the business’ building, breaking windows and damaging the structure of the building, too.  Over 225 feet of skid marks led up to our client’s point of rest, about thirty feet from the curb line.  It was quite a mess.

Greg Hill & Associates met with the client and immediately drove with him to the accident scene to better understand what happened.  The client was quite candid in simply admitting that he and his friend were drag racing.  After all, the roads were deserted and four lanes in width just for southbound travel, so it did not seem to endanger anyone else.

Our client tried changing lanes away from his friend, but then decided against doing so, while accelerating rapidly.  To avoid changing lanes, he turned the wheel quickly in the opposite direction, causing his vehicle to instantly spin out of control.  He then panicked and did not even hit the brakes.  The skid marks on Hawthorne seemed to confirm this sequence of events. 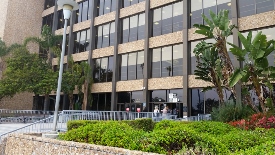 Greg Hill then appeared at the arraignment and discussed the case with the Torrance City Prosecutor assigned to the case.  She understood that the case was more of an accident than a typical crime, but it still represented extremely reckless behavior that endangered the client himself and his friend, so it was a crime of public safety.

Greg explained that the client would be more than punished monetarily by the insurance rate increases, so it was really not necessary to punish him in a criminal context too much.  No one was injured, either, luckily.

Greg then negotiated a plea bargain for our client wherein all charges were dismissed except count one, Engaging in a Speed Contest on a Public Highway.  In exchange for this plea bargain, our client pled no contest to count one and was sentenced to two years of informal, or summary probation, ordered to perform ten days Cal Trans work, ordered to perform 40 hours of approved community service and a have a six (6) month suspension on his driver’s license.  The client also stipulated to liability for restitution to the furniture store, Southern California Edison and the county light pole.

Had our client fought his case at trial and been found guilty of each charge (which seemed probable), he faced a maximum of 3 years and 9 months in Los Angeles County Jail, as well as thousands of dollars to pay as restitution to the business damaged during the collision and to Southern California Edison (for the power pole and power box).
For more information about summary probation, click on the following articles:
Contact us.