Our client was 34 years-old and homeless.  He had been unemployed and living out of his car with his girlfriend.  He was hungry and working odd jobs that paid very little.

He also had multiple mental problems, for which he self-medicated with marijuana, cocaine, heroin and methamphetamine.

In a Nutshell:  Client arrested for possession of meth in Torrance.  While released on his own recognizance (OR), he is arrested for being a “peeping Tom.”  We declared a doubt as to his mental competency.  The case was ultimately resolved for informal probation and 52 Narcotics Anonymous (NA) meetings.

One day, he was walking through an alley in the Torrance area north of 190th Street and south of North High School.  He was famished.  He saw an open garage door and a box of cereal sitting on a counter inside the garage.

He decided to help himself to the box of cereal, which was probably worth five dollars or so.  Just as he did so, the homeowner entered the garage from a door connecting to the home and saw our client holding the cereal box.

The police arrived and arrested our client for taking the cereal, all the while our client tried to explain that the homeowner consented to the theft.  The police frisked our client and found a small pocket knife and a baggie of methamphetamine in his pocket.

The officers asked our client what the baggie contained and our client explained to the police that it was some type of powder that helps one work harder and that he bought it from a man in Koreatown for $5.  Police naturally knew exactly what it was, but were amused by our client’s description of what the powder was for.

The client was then taken to the Torrance police station and booked.  He then called his parents, who called Greg Hill & Associates.

It was a weekday afternoon, about five p.m., when the call came in.  Greg briefly spoke with the parents and then went over to the Torrance Police Station to meet the client.

Greg discussed the facts of the case and noticed that the client seemed a bit odd, perhaps because he was still under the influence of the “energy powder,” which the client told Greg was not methamphetamine or cocaine. 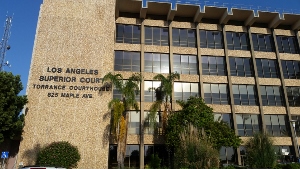 Torrance Superior Courthouse
Two days later, the client was arraigned in the Torrance Superior Court on charges of violating Health and Safety Code § 11377(a), possession of a controlled substance (methamphetamine) and Penal Code § 484(a) (Petty Theft).  He was released on his own recognizance, but with a requirement by the judge that he attend two Narcotics Anonymous meetings per week while the case was pending.

At the arraignment for the new case, the peeping tom matter, Greg declared a doubt under Penal Code § 1368 as to the client’s competency.  The Torrance judge then suspended proceeding in both cases (combining them to the same date) and referred the matter to the Los Angeles County Mental Health Court, also known at Department 95 in the Metropolitan Courthouse downtown.

Greg then appeared there several times, as the judge there appointed an expert to evaluate the client’s mental ability to stand trial.  It took several weeks for the appointed expert to interview our client and then prepare her report, however, eventually, the client was found fit to stand trial.

The case was then referred back to the Torrance Courthouse and resolved.  The client then, the next day, entered a plea to a violation of Health and Safety Code § 11377(a) was placed on three years of summary probation with a requirement that he attend 52 Narcotics Anonymous (NA) meetings.  The petty theft charge was dismissed.  He otherwise was credited with time served and released the following day.

For more information about drug offense and declaring a doubt issues, please click on the following articles:
Contact us.