Our client, age 24, and his friend decided to celebrate the end of summer by going to a park and get high on LSD and just enjoy the warm weather.  They drove to Torrance and found De Portola Park off Rolling Hills Road, along the southern border of Torrance and Rolling Hills Estates.  Our client was a passenger in his friend’s car.  They were both from Long Beach.
They found De Portola Park and went out on the vast expanse of grass.  They sat down, each smoke a joint and enjoyed the sun.  This was about 3:00 p.m.  They drank some water.  Then they each took a few hits of LSD in oral form.
Soon they each were feeling the effects and walking around the park, playing on the children’s playground equipment and then laying down.
At some point, our client’s friend got in his car and left our client behind at the park.  Our client knew his friend had separated from him, but he did not know his friend had actually driven home without him.  Our client wandered around the park, looking in the parking lot for his friend, perhaps waiting in his car. 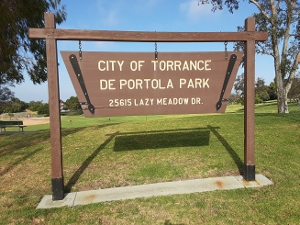 De Portola Park Torrance
It soon neared 7:00 p.m. and our client was getting hot, so he took off his shirt and sat on a curb along the edge of the park.  A passerby saw our client and suspected he was high, so that person called the Torrance police, who arrived to find our client sweating profusely and sitting on a curb, still with his shirt off.
Police asked our client if he was sick and our client told police no, but added he had just taken a lot of LSD and was not feeling well.  Police then asked to frisk him and our client consented.  Police then found a white powdery substance in a small plastic baggie.
Police suspected the substance was meth, but our client told police it was “Special K,” or ketamine.  Police seized the baggie as evidence, measuring its weight at 0.258 grams, and called our client’s mom, who came to the Torrance Police Station and picked up our client.
Our client had no criminal history.  His mom had adopted him from Russia as an infant.  He had enjoyed school so much that he earned “seven or eight – I can’t remember exactly” AA degrees from a local city college and had never worked.
Once the client’s mom arrived at the station, police released our client to his mom after he signed a promise to appear in the Torrance Courthouse in about eight weeks.  The charge listed was a violation of Health & Safety Code § 11377(a), possession of a controlled substance.
The client’s mom then called Greg Hill & Associates and spoke with Greg Hill.  The mom was very concerned about how having a misdemeanor would affect her son’s future.  Greg explained how such cases are generally handled in the Torrance Courthouse and how a drug diversion program like PC 1000 was not unusual to be offered to have the case resolved, as 0.258 grams was not a large enough quantity to be considered for sales.
Greg then described how the terms of PC 1000 can vary by courthouse and the length of the program can be up to 18 months long, but would most assuredly include some form of drug treatment program, most likely through at least 52 Narcotics Anonymous meetings.
Greg explained further that if and when the client completed the program, the case would then be dismissed under Penal Code § 1385, which meant the arrest record and court file would be eligible for sealing under Penal Code § 851.91 and § 851.92 under the new CARE Act.
Greg then appeared at the arraignment at the Torrance Court and discussed the police report with the Torrance City Prosecutor, whose first offer involved our client pleading no contest to a violation of Health & Safety Code § 11377(a) and being placed on 36 months of informal, or summary, probation, attending 52 Narcotics Anonymous meetings, paying a court fine of $300, plus penalties and assessments (total of nearly $1,600), performing 80 hours of community service and paying the City of Torrance booking fee of $459.
Greg saw the offer and asked the Torrance City Prosecutor if PC 1000 would be available instead and she responded yes.
At the next court appearance, Greg and the client appeared together and the judge placed our client on PC 1000 diversion with an obligation just to attend 52 Narcotics Anonymous meetings at the rate of one per week and to stay out of De Portola Park.  If our client did this over the next year, the case would be dismissed under Penal Code § 1385.
The client was very happy with this resolution and glad Greg was aware of PC 1000 and negotiated for its imposition, rather than the offer the prosecutor proposed at first.
For more information about possession of a controlled substance, please click on the following articles:
Contact us.
Serving Torrance, Long Beach, Compton, Airport Courthouses and Other Courthouses.