Our client, age 22, had flown from New Jersey to Los Angeles for a soccer tryout at the Honda soccer fields adjacent to the Torrance Courthouse.

His English was a second-language, Spanish being his primary language although he was born in the United States.
He flew into LAX and rented a car through a Hispanic rental car agency that served Spanish-speaking customers.  The car he rented was someone’s primary car who lent it to the rental car company on his days off work.  The car carried the owner’s recycled cans and glass bottles in the trunk area in garbage bags.  The car also had tinted windows and the registration was expired.
Our client rented this car and drove from the LAX area to the Honda fields.  The tryout was at 8:00 p.m., under the lights.  This was mid-December.  When our client arrived, the local area youth soccer club teams were finishing up practice, so parking was difficult to find up close.  He ended up parking on a side street off Maple. 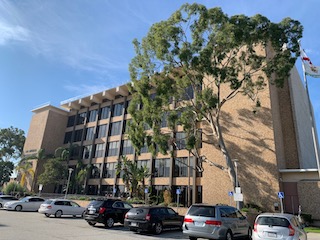 Torrance Courthouse
When our client finished the tryout, it was close to 10:00 p.m.  Where he parked was now deserted, except for his car parked in front of a business.

Police had noticed his car parked there for some time and regarded it as suspicious, as possibly belonging to someone burglarizing the nearby business.
Our client came back to his car and drank a Gatorade.  Police pulled alongside him and immediately ordered him to provide his identification and insurance.
The client, clad in soccer cleats and soccer shorts, as well as a sweat-soaked t-shirt, did not comply.  Instead, he asked why they wanted this and told the police to leave him alone.
The Torrance Police Officers, upon hearing this, immediately demanded he take a seat on the curb so they could search our client’s car.  The client refused to sit down and demanded to speak to a supervisor.
This caused the police to physically restrain our client and put handcuffs on him.  They then searched the inside of the car and found an empty vodka bottle among the other bottles in a trash bag for recycling.
Our client was then arrested for obstructing or delaying arrest (Penal Code § 148(a)(1)), illegal tinted windows (Vehicle Code § 26708.5(a), lack of insurance (Vehicle Code § 16028(a)), and having an open container of alcohol (Vehicle Code § 23222(a)).  He was outraged.
He could not post bail, so he was held in custody for two days in the Torrance jail until arraigned the following Monday, still in his soccer gear.  He did not accept the plea bargain offered by the prosecutor and was then released on his own recognizance, as he had no prior record.
The plea bargain offered was that the client serve 60 days in county jail, and pay a court fine of $300, plus penalties and assessments (total of about $1,400), attend 52 anger management classes, pay a $449 booking fee and be on summary probation for 36 months.
He then returned to New Jersey and called Greg Hill & Associates.  Greg Hill spoke with the client and listened to him describe what had happened.  The client also provided Greg with a vehicle inspection report by the true owner of the rental car showing the windows passed an inspection at the Hawthorne Police Department and proof of insurance.
The client then retained Greg Hill & Associates.  Greg then went to court for the next appearance and showed the prosecutor the proof of insurance and the car’s window inspection report.  Greg also received the body-cam video and audio of the client’s detention and arrest.
The Torrance City Prosecutor reviewed the audio and video as well.
At the next hearing, Greg requested a dismissal of all charges and an amended complaint for disturbing the peace (Penal Code § 415).  In response, the prosecutor offered dismissal of all charges except one count of obstructing or delaying arrest (Penal Code § 148(a)(1)), as the client did physically struggle with the police officer for about thirty seconds when they were trying to get him to sit down.  The client would be placed on 24 months of summary probation, have to pay the City of Torrance booking fee and pay a court fine of $300, plus penalties and assessments.
Greg argued that this was an illegal detention, but the prosecutor was not persuaded.
Greg then explained to the client that based on the video and the audio, a jury most likely would convict him of obstructing or delaying arrest.  The client then accepted the plea bargain, greatly happy that the 60 days of county jail had been removed, as well as the anger management classes that were part of the original plea bargain offered.
For more information about the issues raised in this case, please click on the following articles:
Contact us.
Serving Torrance, Long Beach, Compton, Airport Courthouses and Other Courthouses.