The following appellate court ruling strikes the gang enhancements found true by a Torrance jury in the courtroom of Judge Edmund Willcox Clarke, Jr., who recently retired and was greatly admired in Torrance.

Summary in 50 Words or Less: Defendant successfully argued on appeal that his three crimes were for his own benefit, not for the benefit of a gang.  Defendant did this by showing he acted alone, was not wearing gang colors at the time, did not display any gang signs or say any gang slogans and the crimes were committed outside the gang territory.

We present this summary to exemplify the type of testimony from a gang expert that is not good enough to support the Penal Code § 186.22 sentence enhancement and to suggest to the good criminal defense attorney ways to undermine such expert testimony to replicate the result in this case in the trial court without needing an appeal.
The underlying case involved a man named Leonard Lejohn Gonzalez violently snatching three gold necklaces directly from the neck of three separate people in three separate incidents.  The prosecution alleged that Gonzalez committed the three second-degree robberies for the benefit of, at the direction of, or in association with, a criminal street gang, the Boulevard Mafia Crips.  Gonzalez had two prior serious felony convictions that were considered strikes under the Three Strikes Law.
The defense stipulated that the Boulevard Mafia Crips was a criminal street gang within the meaning of Penal Code § 186.22 and that Gonzalez belonged to this gang.
The three victims identified Gonzalez as their assailant to the jury in Torrance.  A video showed him at one of the crime scenes.  He had a very distinctive tattoo saying “Cash Boy” on the front of his neck. 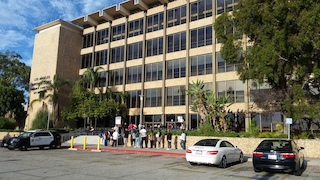 Torrance Courthouse
The jury found Gonzalez guilty of all three counts of second-degree robbery and found the gang allegations true.  Judge Clarke sentenced Gonzalez to 25 years to life in prison on count 1 (as it was a Third Strike), plus five years for the prior serious felony enhancement.  Judge Clarke also sentenced Gonzalez to 25 years to life on counts 2 and 3 to run concurrent with the principal term and 15 years for each of the gang enhancements, to run concurrent with the life sentences and stayed those under Penal Code § 654.
Gonzalez appealed the gang enhancements, arguing there was insufficient evidence to support the jury’s findings based on the gang expert’s testimony.
The Second Appellate District Court agreed with Gonzalez, so a review of this opinion is quite important and helpful to anyone facing or defending someone accused of committing a crime for the benefit of, at the direction of or in association with a criminal street gang.  He argued that he committed these crimes for his own benefit and not at the direction of or to benefit the Boulevard Mafia Crips.
The Second Appellate District summarized the testimony of the prosecution’s criminal street gang expert, Long Beach Police Officer Alexander Roberts.
Officer Roberts was assigned to a unit combatting gang activity.  He testified that he used a “three-pronged approach” for determining if a person is a gang member.  He looks at the person’s clothing to see if it representative of any gang colors or styles.  Second, he considers the location of the crime to see if it within the territory of the gang the clothing may be associated with.  Third, he considers tattoos to see what they represent.  Roberts was familiar with Gonzalez specifically, as he had helped arrest him on prior incidents.
On cross-examination, defense counsel elicited testimony from Roberts that:
Furthermore, the expert could not testify and agreed there was no evidence that Gonzalez showed the stolen gold necklaces to the other gang members, i.e., there were no social media postings showing this.  The only other person involved in one of the three robberies was not a gang member.  There was no proof that Gonzalez sold the necklaces and shared the cash with the Boulevard Mafia Crips.  There also was no evidence that Gonzalez told other members of the gang about his robberies.
In addition, none of the victims saw Gonzalez’s gang tattoos.
The Second Appellate District consequently found that the jury erred in finding that Gonzalez committed these crimes with the intent to promote, further or assist criminal conduct by gang member, as required by California law in People v. Aguilar (2010) 51 Cal.4th 47, 59.
The appellate court went further, commenting that “it is insufficient for an expert to simply to announce, “based on my experience and observations, X is true”  This is the method of the Oracles at Delphi.  It is the black box.  This method cannot be tested or disproved – a feature convenient for would-be experts but unacceptable in court.  This “Field of Dreams” “trust me analysis” amount only to a defective “faith-based prediction.”  Sargon Enterprises, Inc. v. University of Southern California (2012) 55 Cal.4th 747, 766; see id., at p. 778 (excluding expert opinion that was “nothing more than a tautology”).
This is a great case for the defense, as it provides a road map of sorts to distilling out expert opinions that really are just speculation and appeal to a jury’s suspicions, but nothing more.
The citation for the Second Appellate District Court ruling discussed above is People v. Leonard Lejohn Gonzalez (2nd App. Dist., 2021) 59 Cal. App. 5th 643, 274 Cal. Rptr. 3d 1.
For more information about a sentencing enhancement based on one’s relationship to a gang in committing a crime, please click on the following articles:
Contact us.
Serving Torrance, Long Beach, Compton, Airport Courthouses and Other Courthouses.